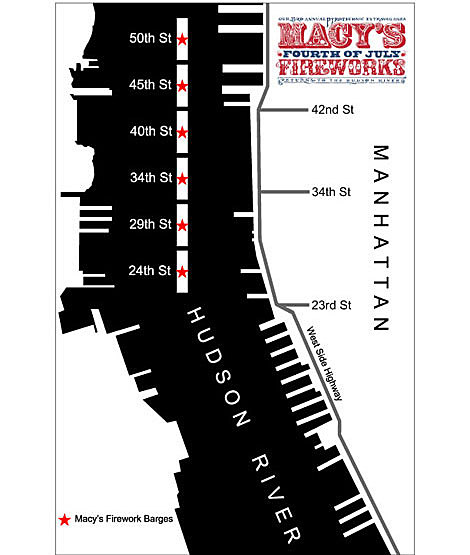 "To celebrate the 400th anniversary of Henry Hudson's voyage to what would become New York, the Macy's 4th of July Fireworks this year will move to the Hudson River, Macy's has announced.

The SOUSA fireworks will be set off from six barges in the river positioned between 24th and 50th streets for a 26-minute show featuring approximately 40,000 shells and a live score including "Proud Mary" and "God Bless America" played by the New York Pops.

"The Hudson River is where Macy's 4th of July Fireworks was born," Robin Hall, executive producer of Macy's Fireworks said in a statement announcing the move from the East River. "We're excited to return this year to be part of New York City's larger celebration of the 400th Anniversary of Henry Hudson's voyage of discovery aboard the Dutch vessel, The Half Moon." [Newyorkology]

I think that means no view from Brooklyn this year. :(