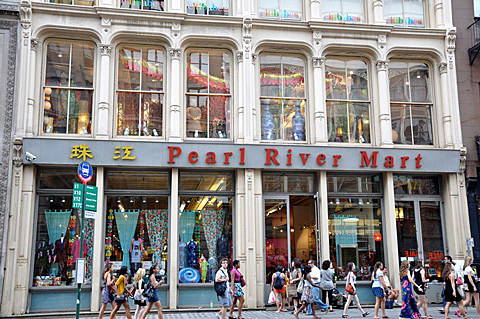 Pearl River Mart, NYC's one-stop shop for bowls, tea, lamps, ramen, clothing, hot sauce, Buddha statues and other essentials for living, will be closing its three-level store in SoHo at the end of the year. Why? Their currently $100,000-a-month rent would leap to $500,000 in January:

The 44-year-old store is the latest victim of rising rents on Broadway and increased competition from online retailers like Amazon and Alibaba. Pearl River currently pays more than $100,000 a month for its shop, and rent would rise more than five times when the lease expires at the end of December, according to Ms. Chen.

"When we moved here 12 years ago, there was nobody around," Ms. Chen explained, noting the arrival of big retail chains Topshop, Muji and CB2 to Broadway. "Right now this is one of the hottest spots in New York."

Pearl River, which was co-founded by Ms. Chen's husband, Ming Yi Chen, occupies 30,000 square feet spread across the ground, second and basement levels of 477 Broadway, between Grand and Broome streets. Though it started in Chinatown on Elizabeth Street in 1971, it has moved twice before--first to the corner of Canal and Broadway and then to its current SoHo space. It employs 40 staffers. -[Crains]

Pearl River's owners are currently looking for a new location (they also have an online store).