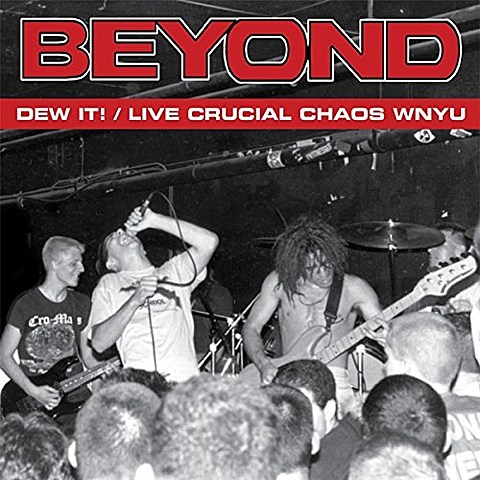 When Long Island's Beyond appeared out of nowhere with their Dew It! demo in 1988, they brought something matchless upon the scene. With a love for both their hometown Hardcore scene as well as D.C's Dag Nasty - not to mention a covert sprinkling of the chops they learned from their origins in Heavy Metal - the band rapidly rose within the ranks of the scene. Upon the strengths of the demo alone, they were soon touring with the likes of Gorilla Biscuits and Judge.

But within a year of Beyond entrenching themselves in the NYHC scene they were falling apart at the seams due to collegiate responsibilities and guitarist Tom Capone joining Bold on second guitar (which would eventually lead to him forming Quicksand with Walter Schreifels). But there is no doubt of the impact they have left upon the Hardcore scene many years after the fact. ['NYHC 1980-1990' author Tony Rettman for Noisey]

NYHC vets Beyond (who, as the above quote points out, included a future member of Bold and Quicksand) have been reunited for a bit now, but shows are still few and far between. They'll play a rare hometown show on October 29 at Saint Vitus with Nuclear Age, which Noisey is presenting. The lineup for this show is Kevin Egan, Larry Gorman, Tom Capone and Vic DiCara (also of 108, Shelter, Burn and Inside Out). Tickets are on sale now.

The show is a release party for the Revelation Records reissue of their 1988 demo Dew It!, which comes packed with a session they recorded for the WNYU radio show "Crucial Chaos." Order yours. Tracklist, and a stream of "One Kind Word" from Dew It!, below.