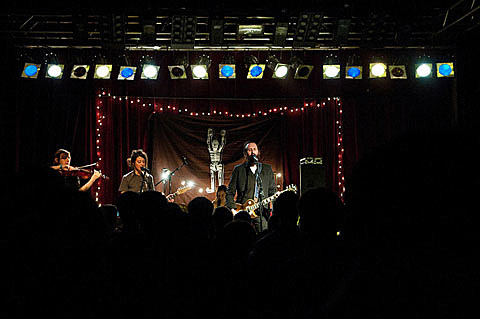 Many believed [their 2003 breakup] was the end for Carissa's Wierd, but last year, the band got back together for a one-off reunion show in Seattle, and last month, they released a new single entitled Tucson. Now the band [played] their first non-Seattle gig in more than 8 years at Kimmel's E&L Auditorium this [past] Monday. For a very small group of people, this show is the equivalent of Godspeed You! Black Emperor's five-day stand in NYC last spring.

The Program Board's New Music Chair, Nicole Cobb, who was responsible for booking Carissa's Wierd, explained that she had been in touch with Jen Ghetto, one of the band's two vocalists, to try and book her new project S. "I asked about the possibility of getting Carissa's Wierd to play. I knew it was a long shot, but I had to ask. At first, she said that it probably wasn't possible, but this July, she let me know that it could be a possibility, and at that point, I did everything in my power to make this show happen."

To round out the bill, Cobb booked Kayo Dot and Arms & Sleepers. "I think they both bring interesting things to the show. Kayo Dot, similarly to Carissa's Wierd has a really strong underground following. Not a lot of people know their name, but those who know them tend to love them," she explained.

A video from the above-pictured Seattle show below...