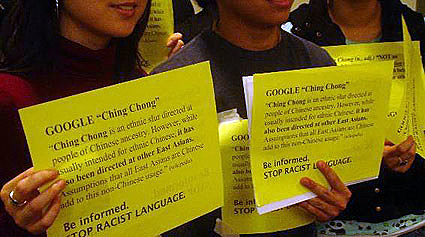 The band "Ching Chong Song" opened for Jeffrey Lewis @ NYU last night (less than a block away from where Arcade Fire was playing inside a church). There was a student protest outside the show. This press release explains it all:

Greenwich Village, NYC – Last night, 20 New York University students held an educational rally to demonstrate against “Ching Chong Song,” a Brooklyn indie-folk band. (Both band members are Caucasian). The NYU students stood outside the band’s performance to pass out flyers educating attendees of the offensiveness of the phrase “ching chong.”

“Words like that contain a painful history loaded with intolerance, hatred, and belittlement,” said NYU sophomore Chi-Ser Tran, a demonstrator.

When the band learned of the impending rally, it agreed to change its name and to make an apology during its performance. Band pianist and singer Dan Gower said the name wasn't changed until now because of “all the action people have taken.”

The band formerly known as “Ching Chong Song” experienced similar protests in December at Bryn Mawr College. The protests there successfully got the band’s scheduled performance to be cancelled. Julia LaMendola, the other band member, wrote an open letter in the Bryn Mawr’s student newspaper in response: “Growing up a child of a gay parent in a tiny town, a poor second-generation Italian girl, I also have experience with the nuances of language. And give me a break you stupid twats…By the way, ‘ching chang chong’ is what people in Germany call the game rock paper scissors, and stupid petty retards is what I'm calling you.”

“While I am heartened that the band has agreed to change its name, I hope that we focus on the issue at hand: racism,” said NYU junior Frederick Loo Wong, a lead demonstrator. “We cannot hold pejorative epithets to differing standards. I am offended when someone uses the word ‘gay’ inappropriately. It is breath-taking when someone uses the ‘n-word.’ Why can’t the same apply to ‘ching chong’?”

NYU senior Lily Yuan expressed concern about the sincerity of the band’s apology. “But, even though the band changed their name, they announced it with sarcasm and pride and few words that meant nothing and left us standing in humiliation and shock.” Yuan was brought to tears during the band public apology when band member LaMendola said, “The college banned me from performing and then I wrote them a letter calling them retarded twats [the audience laughed]...Yea I thought it was pretty funny too...”

"However we may feel about the band's apology, what we have done here tonight is show New York City that Asians are not to be belittled. We can organize and will not tolerate insults. But first, we need to all understand each other for a better society," said Wong.

The band has agreed to change its name; however, it has yet to reflect those changes on its website. Also lacking is an apology on the website. The band’s website is: http://chingchongsong.com/

An article in NYU's campus paper may be found here:

Gothamist also just threw up a post about this.