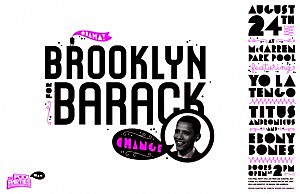 "On August 24th, Brooklyn for Barack is partnering with JellyNYC to co-host the Last Pool Party (ever) at McCarren Park Pool in Greenpoint, Brooklyn. Held one day before the start of the Democratic National Convention, the event hopes to not only raise money for Barack's campaign but to celebrate the increased participation of youth in this election. The Pool Party is an all day concert, featuring Yo La Tengo, Titus Andronicus, Ebony Bones, and other special guests. Although the Pool Party is free to enter, there is a suggested donation of $20 that will go directly to Obama for America. There will be a free concert poster- designed by Jessica Hische- for the first 1000 people who donate $20 or more. Please donate by clicking on the image at the right of the screen!

Note: donating here does not guarantee your entrance to the concert! Please arrive early! When the event reaches capacity, they will turn people away." [BarackObama.com]

That's a conflicting message. Are they asking for $20 at the door which gets you the poster on the spot (which you then have to carry all day), or are they asking you to donate online which doesn't even guarantee you get in and may or may not get you a poster.... I'm confused.

Obama's addition to Sunday's lineup (not literally!) seemed to pop out of nowhere, but I think it was planned all summer. Various people sent me pieces of information about an "Obama fundraiser" at McCarren - possibly with Mos Def involved, possibly with a lot of arguing about who would play the show and possibly at a free Pool Party (which I didn't get). Nothing concrete ever showed up so I didn't post it. They seem to be downplaying it to the general Pool Party public (aka no mention of it at all on Jelly's website) while letting Obama's people do their thing.

BTW, DJ David Cross and Syd B (Les Savy Fav) are also on Sunday's bill. You'll probably recognize their familar faces at the DJ booth on the left of the stage.