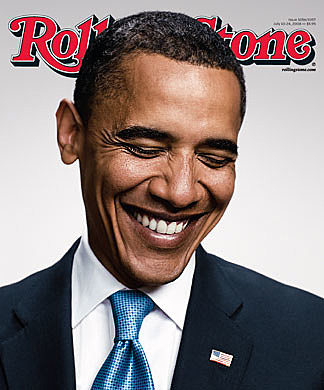 Barack Obama is a Stevie Wonder geek. In the Democratic presidential candidate's new interview with Rolling Stone editor-in-chief Jann S. Wenner, Obama waxed rhapsodic about his favorite artists, many of whom -- Bruce Springsteen, Bob Dylan, Jay-Z -- have shown him love with endorsements.

"If I had one musical hero, it would have to be Stevie Wonder," says Obama, who grew up on Seventies R&B and rock staples including Earth, Wind and Fire, Elton John and the Rolling Stones. "When I was at that point where you start getting involved in music, Stevie had that run with Music of My Mind, Talking Book, Fulfillingness' First Finale and Innervisions, and then Songs in the Key of Life. Those are as brilliant a set of five albums as we've ever seen." [Rolling Stone]

Now I am a little conflicted. Although I definitely want to vote for the candidate who likes Dylan and The Boss, I'm not sure I can get behind a person who also claims to have Sheryl Crow on their iPod.