Gotye at Webster Hall in March (more by Ryan Muir 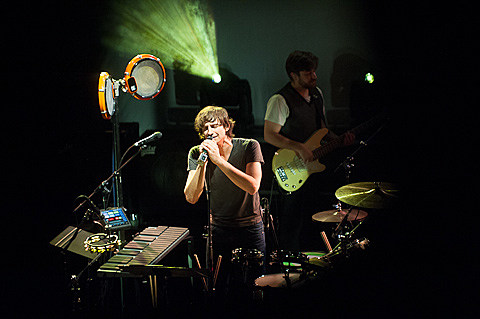 Last Friday (6/29), it was revealed that CNN was among the group of news outlets (including Fox News and The Huffington Post) who wrongly reported that the individual mandate central to President Obama's health care legislation was struck down. As you know, and as they quickly corrected, the court actually ruled that the provision could be upheld as a tax. In a statement regarding the incident, CNN senior vice president Sam Feist said, "Today we failed to adhere to our own standard, namely it's better to be right than to be first. We take mistakes seriously, especially mistakes on such important stories." (via Huffington Post).

Obamacare isn't the only thing that CNN has gotten wrong in the past week though. NME reports that last night (7/1), CNN's iReport program broadcasted that Gotye had committed suicide. Here's the statement: "'At 4:32 AM EST, it was reported that Gotye had shot himself in the head with a 9mm handgun. He was pronounced dead at 4.45AM, and the investigation concluded that the cause of death was suicide.'' Meanwhile, Gotye took to twitter soon after, tweeting, "I'm not dead. #Pinkalbumtitles." CNN has since removed the post. Tim Shiel of Gotye's touring band had fun with the mishap, and took to twitter himself, saying, "it saddens me to confirm the news of @gotye's passing- he suffered cardiac arrest while flying a unicorn over a double rainbow" and "don't panic the @gotye world tour is still going ahead, with special guest Terence Trent D'arby. its what wally would have wanted" (referencing Gotye's birth name, Wouter "Wally" De Backer and Terence Trent D'arby, one of the singers who briefly took over when fellow Australian band INXS replaced their lead singer). So for anyone who may have been worried by CNN's false report, Gotye will be live and well for his North American tour which hits NYC twice in September.

In other more exciting CNN news, CNN anchor Anderson Cooper, who has avoided talking about his personal life for years, finally came out as gay. In an email to Andrew Sullivan (who is also an openly gay news reporter), Cooper said, "The fact is, I'm gay, always have been, always will be, and I couldn't be any more happy, comfortable with myself, and proud."