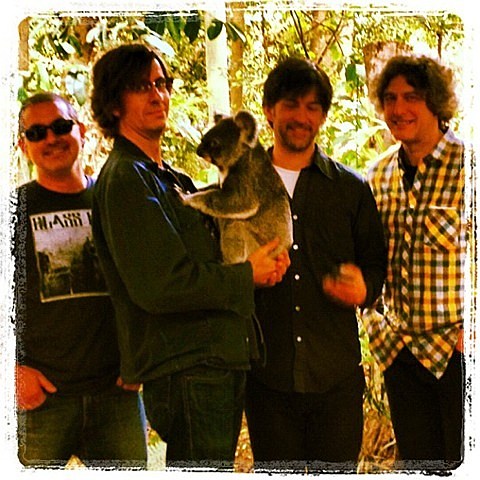 Like we've done with a lot of bands this year, we asked Brooklyn's Obits for a list of their favorite albums of 2012. Guitarist Sohrab Habibion wrote back saying, "It usually takes some time to figure out if a record is really going to stick with me, so even though I liked what I heard from Beak, Disappears, Oneida, Pontiak, Royal Baths and Zomes, I'll submit my best of 2012 in a few years," and instead said, "since Obits is working on a new record, here are the Top 10 songs we will do our best not to directly rip off." You can check out that list, complete with YouTube clips for each one, below. Drummer (and onetime Girls Against Boys member) Alexis Fleisig also submitted "Top Ten Things I Completely Took For Granted This Year" which is below as well.

Sohrab, who also reformed his old band Edsel for a couple shows this year, also gave a rundown of Obits 2012 activity and what's in store for 2013:

Despite not putting out a full LP, we kept pretty busy. We released two 7"s - one on Sub Pop with 2 covers and another on a Spanish label called La Castanya with 2 originals on it.

And along with some east coast shows, Austin and Denver (a new US city for us), we went to Europe twice this year, getting to play in Greece, Portugal, Italy and Sweden for the first time. We also went to Australia, which was truly as cool as every band that goes there says it is.

On the horizon ... a couple NYC shows.

3. Finishing our next album. We have bunches and bunches of song fragments in various stages. The next few months we will be deciding what's worth keeping or working on or tossing in the trash.

4. Going back to Europe in June. It'll be a combination of places we've been and haven't been, including Poland and Ukraine, which we're looking forward to.

Also, this year there were some Hot Snakes shows and an Edsel reunion & re-issues (http://www.comedyminusone.com/023.php), which was kind of unexpected. Next year there might be a handful more Hot Snakes shows, maybe an Edsel appearance or two (along with additional re-issues and tunes from the vault), as well as some Girls Against Boys activity.

Sorhab and Alexis' Top 10 lists are below...

Obits' Top 10 songs we will do our best not to directly rip off on our next album:

Dr. Feelgood - She Does It Right

The Great Society - Often As I May

The Mekons - Where Were You?

Top Ten Things I Completely Took For Granted This Year:

1. Whoever decided to combine 2 hydrogen atoms and oxygen atom - maybe it was a Stromatolite?
2. Whoever decided it was a good idea to walk upright
3. Math
4. Language
5. Printing press
6. Internal combustion
7. Sun
8. Gravity
9. Fire
10. Wheel