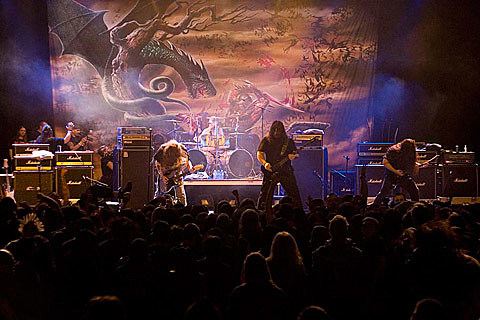 Death metal greats Obituary are channeling their warm fuzzy side for Metal Meowlisha IV: A Headbangers Furball, a show to be held at The Brass Mug in Tampa, FL on December 21 for the benefit of the area's feral cats. Obituary drummer Donald Tardy runs a charity with his wife called Metal Meowlisha that endorses the "trap-neuter-return" policy for homeless cats endorsed by the ASPCA, and the show's proceeds will go to Metal Meowlisha to continue their efforts at controlling the Tampa cat population, feeding and providing medical care for cats, and helping adoptable cats find homes. The Metal Meowlisha embraces a no-kill ideology--whenever possible.

Obituary enlisted fellow death and grind forerunners Terrorizer and Exhumed to fight the good fight for kitties, making this a pretty stacked show for ten bucks, nine if you bring a donation of a can of cat food. Full lineup and flier below.

Obituary guitarist Trevor Perez will be cooking up some BBQ at the show, too. Metal Meowlisha IV isn't the first time Obituary's shown a propensity for BBQ and crowdsourcing--back in September, Obituary raised so much money to record their new album, hitting their $10k goal in under 24 hours, they planned a BBQ to celebrate. That album's due out in 2014.

Obituary recently rolled through Saint Vitus for two sold-out shows as part of a two-month period that ended up being a celebration of old school death metal in NYC with shows from Morbid Angel, Deicide and Carcass. Godflesh would have rounded it out, but they had to cancel due to visa troubles, reportedly caused by a slowdown due to the government shutdown. They've since rescheduled for next April.

No word on if the Metaldudes Cats Book crew will be in attendance at the Metal Meowlisha show. Tickets aren't available right meow, so might as well bring a can of cat food with you on the day of the show.

Check out the flier for this year's Metal Meowlisha and an incredible promo video from last year's below... 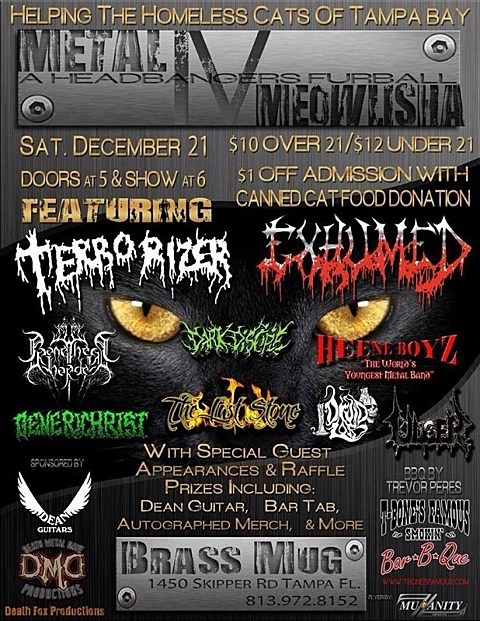