Obituary -- arguably the best live death metal band in existence -- are in the midst of a December headlining club tour that has them playing their first two classic and most loved albums in full. Most cities are just getting their debut "Slowly We Rot," but in NYC they played Brooklyn's Saint Vitus two nights in a row and did "Cause of Death" on night two. Both nights featured a handful of songs from throughout their career to open the show, both included tracks from 2017's self-titled record, and both got 2019 Adult Swim single "A Dying World" after they were done playing the full album (you could call it the encore, but they never actually left the stage). You can see a picture of night one's setlist (where I also remember them playing 2017 album highlight "Ten Thousand Ways to Die"), below. Night two's setlist and pictures from that whole show are in the gallery above.

Obituary -- one of the OG Florida death metal bands (who were called Executioner in 1984 and then Xecutioner in 1986 before settling on Obituary in 1988) -- have played countless stages in their very long career. They still have their original unmistakable core lineup of John Tardy on growling vocals, his brother Donald Tardy on drums, and guitarist Trevor Peres -- each of them still a monster. Bassist Terry Butler has been with the band since 2010, and Kenny Andrews has been playing guitar since 2012. They are a well oiled machine and play to massive crowds at European festivals, and they regularly tour with bigger bands which puts them in larger venues than they would headline themselves, but there's nothing as great as the chance to see them headline their own show in an intimate club setting like they did on Thursday and Friday night. Definitely high on my list of shows of the year.

Unlike Friday's show, Thursday's show was a late one, with Obituary not hitting the stage until midnight on a school night (Kadavar headlined a sold out show in the venue earlier that night). Around 11:55pm -- after opening sets by Long Island's thrashy Extinction A.D. and re-activated '80s thrashy death metal band False Prophet (a treat to get to see), I was wondering if this Thursday night adventure was a mistake, but by 12:05 all pain was gone and I could suddenly remember why the venue was completely packed and I was seeing Obituary for the second time in two months. Many people in the room were probably seeing them for at least the 10th time.

A mosh pit opened, and there was of course that guy who jumped from the stage about 10 times and kept trying to crowd surf (though he admittedly added to the excitement), and we got 75 minutes of pure euphoric death metal before being let back on to the cold streets of Greenpoint.

Obituary just announced a 2020 tour, this time with Black Label Society and Lord Dying. All dates HERE. Photos in the gallery above. 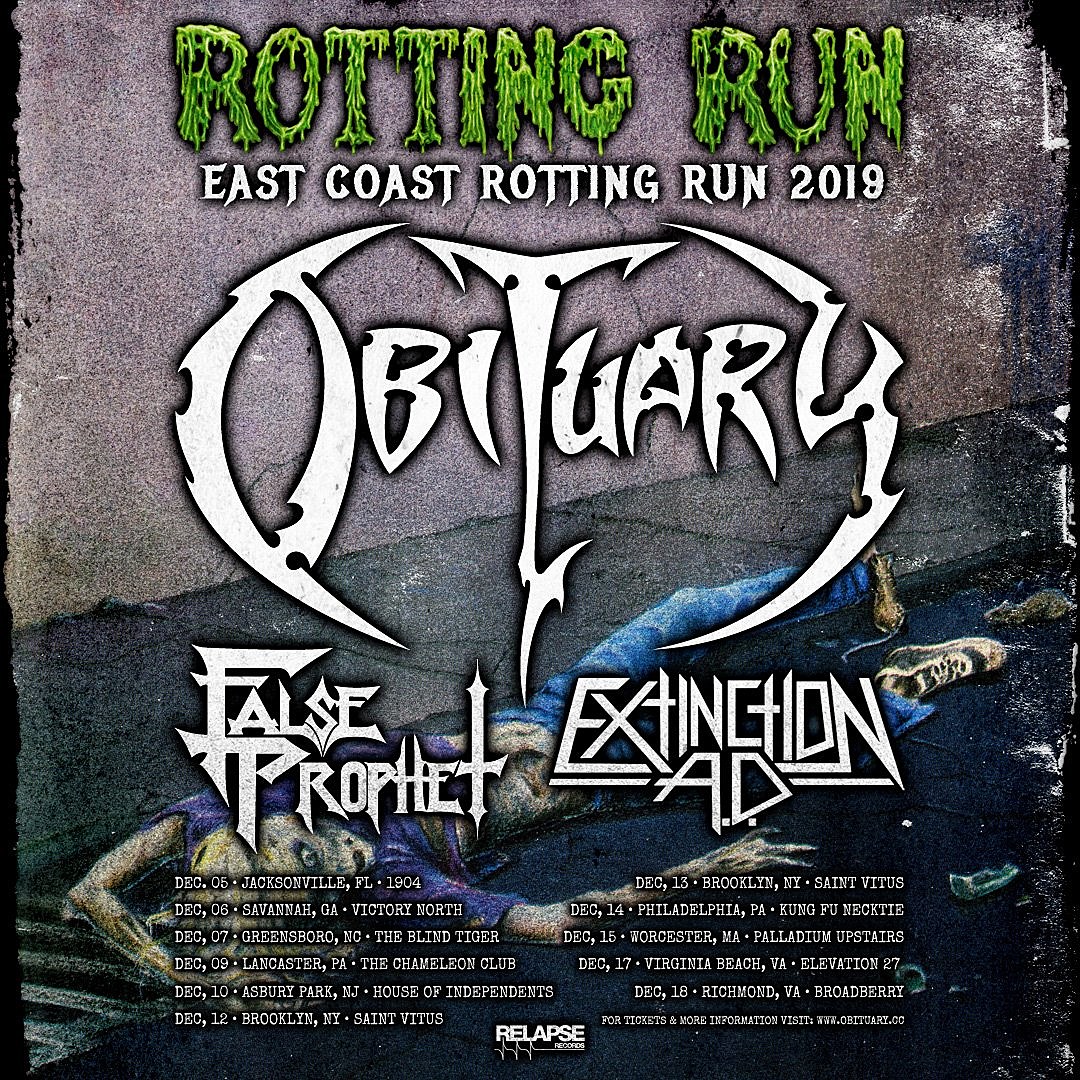