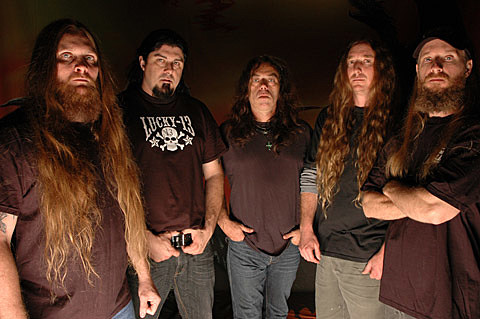 We mentioned a few weeks ago that death metal legends Obituary are hitting the road in October. We also mentioned at the time that Obituary are funding their upcoming album via Kickstarter. At the time, Obituary had already hit their initial $10k goal.

Now, with four days left in their campaign, Obituary are a few thousand bucks shy of the $50k mark. This figure is relatively small potatoes by Kickstarter standards, but it's still impressive for a traditionally impoverished genre like death metal.

How do Obituary plan to spend their embarrassment of excess riches? By throwing a barbecue, of course:

We're going to invite all of our band member friends (from all of your favorite Florida Death Metal acts) to the studio for what will be a sort-of BBQ shindig, beer drinking, hell raising, free-for-all jam session / album release party...and we will perform a new song from the album!

We're calling the whole thing "Obituary's Redneck Studio BBQ and Free-For-All Jam Session" and we will be live streaming the entire thing, including the new song for all of the backers. We'll be doing this thing around November (may change), and we will update you on who will be there as they confirm. It's been a while since our last album release party, and this guest list is looking pretty unbelievable right now.

To top it off - we will be taking and answering questions from the backers during the live stream.

I have some qualms about bands using Kickstarter to fund their albums, and this is kinda why. How many people who backed the album will really have a chance to attend this party? That said, I bet this plan will go over well with said backers, and I have no doubt that the "Redneck Studio BBQ and Free-For-All Jam Session" will have some delicious, uh, proteins for consumption (and perhaps some vegan options?).

Contribute to Obituary's Kickstarter if you really want to find out what Jon Tardy looks like in a speedo. Their tour kicks off with a two-night stand at Saint Vitus on October 9 and 10; tickets are still available.

Check out the full run of Obituary tour dates, listed below.