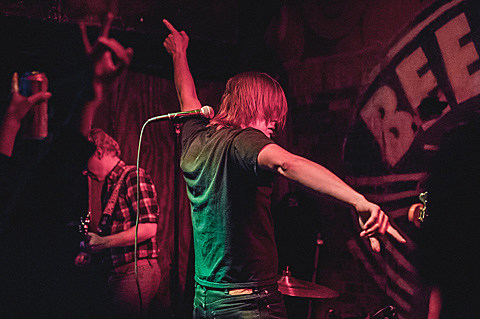 Austin's fierce OBN IIIs released Live in San Francisco over the summer and will soon be Live in a Town Near You, as they're on tour starting this weekend through December all over North America. That includes two NYC shows (currently) during CMJ: Friday, October 24 at Baby's All Right for a Panache showcase with Purling Hiss, Hunters, Calvin Love, Meatbodies, Dune Rats, Happyness, and Homeshake. Tickets are on sale now and that's immediately after our free day party at Baby's. They'll also play Cake Shop on Saturday, October 25 for Panache's free day party with Tonstartssbandht, Dune Rats, The Mystery Lights, Happyness, Ultimate Painting, and Dinner. All dates are listed below. If you've never seen OBN IIIs live, you're missing out:

No one is safe at an OBN IIIs show, thanks to frontman, mischief-maker, sweat-machine and band namesake Orville Bateman Neeley III. He probably spent at least half the time of the band's too-short DbA set last night (7/25) in the crowd, stealing hats of people's heads, making others nervous and just generally messing with people. Not in a scary way, mind you, as long as you're willing to play along. OBN IIIs set was amongst the most fun I've had at a show in a long time. Even if you don't like the music, it's worth going to see these Texans for the antics.

That said, their music is great, pile-driving rock n' roll somewhere between The Hives, Thin Lizzy and Electric-era Cult. Matching the riffs is Neeley's bravado-filled vocals, which fit right in with his larger-than-life performance style.

After CMJ, OBN IIIs will take Brooklyn "thug pop" pand Pampers with them for a string of West Coast dates. Pampers' live show is nearly as intense, though in a different way -- their singer always seems like someone just poisoned him before going on stage, convulsively singing and banging at his Casio SK1 with the tuning peg end of his guitar. They were great opening for Deaf Wish and Ausmuteants at Death by Audio last week. If you haven't heard last year's debut album, stream it below. The band have a new four-song 7", titled Right Tonight, coming out soon on In the Red and you can stream that in full below too.

Pampers have a couple NYC shows before the OBN IIIs tour: they'll open for punk legends The Gizmos at Union Pool on Saturday (10/11) that also has Lame Drivers and Milk Dick on the bill (tickets). They'll also open for Dream Police at their record release show at Saint Vitus on November 8 with Running and Aced as well. (tickets). All Pampers dates are listed below.

And speaking of, Dream Police (the synthy project from The Men's Mark Perro and Nick Chiericozzi) have released a new song from their debut album due out November 11 via Sacred Bones. With a tinny motorik drum machine backing, "Pouring Rain" is the lost link between Flock of Seaguls and My Dad is Dead, and you can stream it below.

OBN IIIs and Pampers tour dates are listed, along with song streams, below...