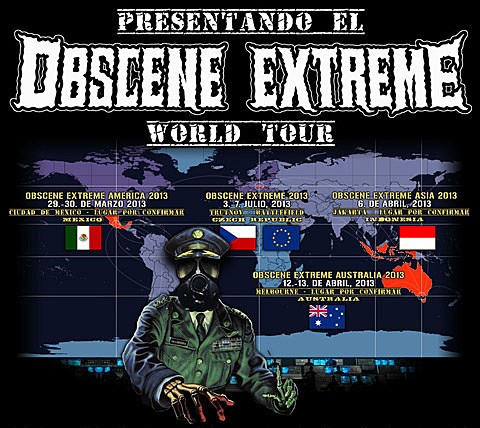 One of Europe's best festivals dedicated to heavy music is taking their show on the road. Behold the Obscene Extreme World Tour:

Since its birth in 1999, over 500 bands have played Obscene Extreme festival from almost every corner of the world, bringing with them a horde of diehard extreme music fans from across Europe and beyond to its home base in the Czech Republic.

What brings fans to Obscene Extreme is more than the cross selection of new and old underground grindcore, crust, punk, death metal, thrash metal, hardcore and everything in between, but the incredible atmosphere, the real DIY ethic and the true spirit of community. It doesn't matter where you're from or who you are, everyone is the same when they're in the pit!

For over a decade people have travelled the globe, driven across continents and slept in airports and railway stations to make it to Obscene Extreme, and now Obscene Extreme is coming to you - rolling into Mexico, Indonesia and Australia like the United Nations of Grind.

The previously only-in-Czech-Republic festival's North American date goes down on March 29th-30th in Mexico City. Details so far are sketchy, but look for this vegan-friendly, underground, low cost festival to land some impressive names like previous alumni Asphyx, Portal, Discharge, Nasum, Wolfbrigade, Wormrot, Yacöpsae, Birdflesh, Gride, Disfear, Mob 47, and so many others.