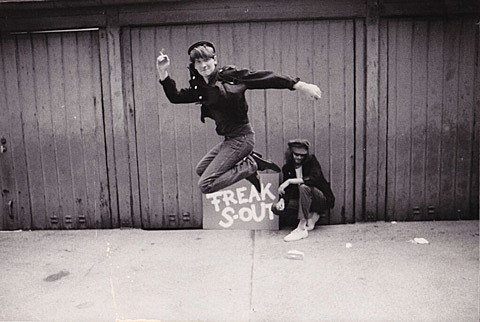 Body Double LTD, a label within Captured Tracks' Omnian Music Group, was founded by Matt Kallman (formerly of GIRLS) and Corey Cunningham (of Terry Malts) and specializes in reissuing obscure, cult records. Their next release is a collection of recordings by German artist Tom Diabo titled Dark Star. He recorded these songs on a 2-track while battling brain cancer. Sadly he lost that battle in 1986 but these recordings (made from '78-'86) resulted in a posthumous LP, and a few recordings that were pressed just for friends and family. With minimal drum machine, synth and guitar backing, the songs are stark and immediate. Says Body Double's Corey Cunningham:

This is a record we found that had that rare immediate impact on first listen. As the album unfurled track-by-solid-track we really started to wonder who this guy was. Where was he from? Where was he now? It took us a long time to find any information and eventually we translated a German article from the 80s that had a little footnote stating he had died of cancer. The push to get this back in print and into the hands of discerning ears is a long, crazy story. It was rife with challenges but has been one of our most rewarding releases so far. I hope Tom gets the cult renown he deserves.

Tom Diabo's Dark Star reissue is out June 23 and pre-orders are available (the vinyl comes with a bonus 7"). You can check the whole thing out now, as we're premiering a stream of the entire reissue. Listen below.