Occultation at Saint Vitus in 2011 (more by Caroline Harrison) 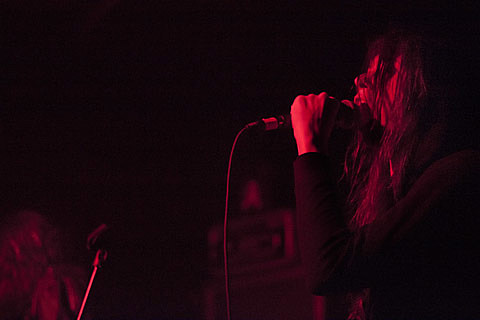 Old school-style NYC metal crew Occultation (who feature a member of Negative Plane) recently put out a new album, Silence in the Ancestral House, which was produced by the inimitable Kurt Ballou, on Profound Lore. It's an ornate, baroque slab of classic-sounding metal, pulling from the theatrics of Mercyful Fate and the dark witchcraft of late '60s occult rock and early doom. The songs are long, expertly composed, and drenched in reverb, and the skill with which this very specific template is executed makes it pretty much catnip for NWOBHM and doom fans. Give it a listen in full, below.

Occultation play locally a good amount (maybe you caught them at the Cult of Youth release show last week), and they've got two upcoming NYC shows at the moment. First, they'll be playing Palisades on Friday (11/21), where they'll be joined by Kosmodemonic, Mountain God, and Think Tank. Tickets for that show are on sale now. They'll also be playing one of the two YOB shows at Saint Vitus that we've discussed, where they'll be joined on the second night (12/13) by Ecstatic Vision. Tickets for that show are still on sale.

Stream the new LP below...