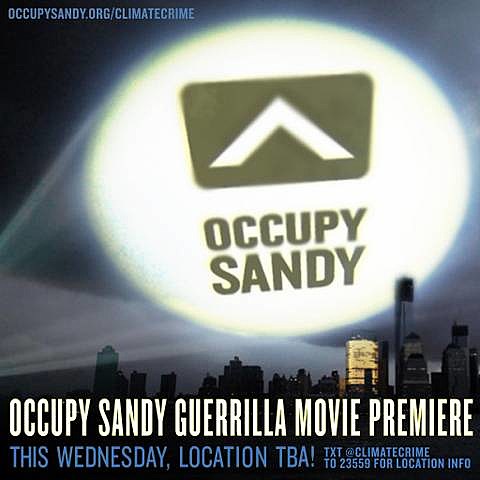 Its been one month since Frankenstorm Sandy struck the coast of the Northeast United States, leaving ruined homes and devastated communities in its wake. Its also been one month since Occupy Sandy leapt into the void left by government agencies and big NGO's to demonstrate the power, joy, and necessity of mutual aid. New York City will forever be changed by these events, as it should be. Now is the time to break the climate silence, and shine a light on the climate crimes that made Sandy inevitable.

Join academy-award nominated director [tonight, 11/28] Josh Fox (Gasland), Occupy Sandy Relief organizers, 350.0rg, The Other 98%, and The Illuminator for a Guerilla Premiere of Fox's new short film "Occupy Sandy: A Human Response to the New Realities of Climate Change," which viscerally shows the damage left behind by the storm, highlights the heroic grassroots efforts of Occupy activists, and draws the connections between the storm, climate change, and the reckless greed of the fossil fuel industry.

After the film, we will hear testimonials from victims of Hurricane Sandy, who themselves are now drawing these same connections. The time is long overdue for us all to make these connections, and to demand that our elected officials and the mainstream media do the same.

If you want to come, join our cell phone text loop by texting @climatecrime to 23559, or follow the hashtag #climatecrime on Twitter. We will keep you updated. What we can tell you now is to dress warm, bring hot beverages, be prepared to move and to be moved..." - [Occupy Sandy Relief NYC]

Check out the trailer for the Occupy Sandy movie and a video invite to the Bell House party below.