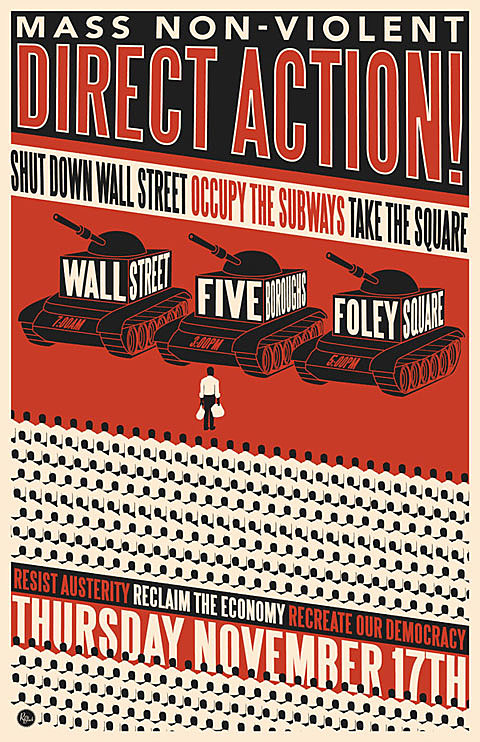 Members of the Occupy Wall Street movement vowed to reoccupy Zuccotti Park after police forcibly removed them early this morning before sanitation crews came into the park to clean it.

Police officials told The New York Times that about 150 people were arrested - most in the park but some outside.

Demonstrators were told they could return in several hours, but without sleeping bags, tarps or tents. By eight a.m. some protesters had returned, jumping over barricades. But the police closed the park again.

Hundreds of other protesters and their supporters marched through lower Manhattan to Foley Square, near City Hall, chanting, "This is what democracy looks like."

...The group is also calling for a "Day on Action" on Thursday, November 17 - the two-month anniversary since the Occupy movement began - to shut down Wall Street and occupy 16 subway stations across the city. At 5 p.m., protesters will gather at Foley Square, before marching to bridges - promising music along the way. [CBS]

Thursday, November 17th is now officially the "International Day of Action". A full schedule for NYC protesters is posted at their site, and it includes:

At 5 pm, tens of thousands of people will gather at Foley Square (just across from City Hall) in solidarity with laborers demanding jobs to rebuild this country's infrastructure and economy. A gospel choir and a marching band will also be performing.

Afterwards we will march to our bridges. Let's make it as musical a march as possible - bring your songs, your voice, your spirit! Our "Musical" on the bridge will culminate in a festival of light as we mark the two-month anniversary of the #occupy movement, and our commitment to shining light into our broken economic and political system.

That's the poster above.

Video of Joan Baez playing for Occupy Wall Street at Foley Square on 11/11, below...