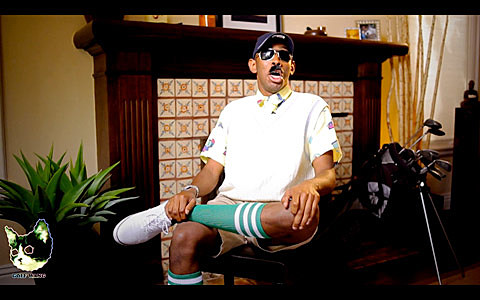 No word on if they consulted Thurnis before they made their move (he might have been on a golf trip -details below-), but Odd Future have formed their own label (Odd Future Records) and will partner with Sony/RED Distribution for a distribution deal. The deal allows the band "creative freedom", as well as freedom from "cheesy hooks or fluorescent liquor product placements" according to their management in a statement to Rap Radar. Tyler also says, "Funny Thing Is, We Won't Sign People Like A Record Label. Same People, Same Shit, All in House." (sorry Paul Scheer.)

Goblin is the name of Tyler's second solo album, out May 10th via XL Recordings. As the LA Times recently said,

"They aren't user-friendly, and that's been lacking in hip-hop for the last 20 years," said drummer and hip-hop expert Questlove of the Roots. He compares them to gangsta rap and hard-core punk. "Lyrically, they channel the first Geto Boys' record, and their attitude, music and presentation bring a similar dark aggression. Odd Future is the new Bad Brains, but I think the mainstream will embrace them even more."

There will be ample opportunity. Earlier this year, Odd Future signed a deal for a pilot on the Cartoon Network's Adult Swim block -- a live-action skit show in the vein of "Jackass" and "Chappelle's Show." XL Recordings, home of indie darlings Vampire Weekend and British provocateur M.I.A., signed a one-off deal to release Tyler's commercial debut, "Goblin," due May 10...

....In Odd Future's case, [their manager's] central concern will be constructing the latticework of the group's business model, which could include clothing lines, skateboards and multimedia crossovers. "Whether it's XL, Interscope, Supreme, or even Apple, Sony or Google, we're looking for the best partner on our content and creations," Airaudi said.

No longer is the central concern selling recordings, he added. "A record label doesn't necessarily have pole position. Creative control and freedom come first. Going forward, successful artists will be ones fully immersed in the intellectual property of their lifestyle." Besides the XL pact, the duo of Mellowhype (Left Brain and Hodgy Beats) inked a similar one-off deal with Mississippi rock and blues label Fat Possum. Other members will no doubt ink their own deals.

"I always wanted to sign to Interscope when I was a kid because it was the label of Dr. Dre and 50 Cent. I want a boat. I want a Grammy," Tyler said. "But I'd never sign a deal without 100% creative control. You lose a lot when you sign with the major labels. I'd rather be broke than have to rap over the same chord progressions as everyone else."

Odd Future recently played (in more ways than one) at Coachella, and will wreak havok at Pitchfork's Festival in Chicago this summer.

Odd Future is hitting the East Coast in May, including the now-sold-out Highline Ballroom on 5/13. In June they're heading to Australia. All dates and the Golf Wang member Thurnis video is below.