Big Stereo wrote, "Muscles is my new favorite artist thanks to recent spins on Whothehell.net and Kiss Atlanta. And judging from Hype Machine I am totally late on this game. You know you’re late when Fluxblog has hit a band not once but twice. AND I don’t know how I missed Muscles the first three times Fluokids posted, but I digress…"

Muscles "emerging from the underground" 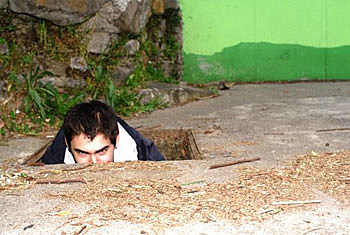 F'd Up are no longer opening for Art Brut (and in turn Soulwax). They were supposed to or something, but now O'Death is opening instead which is actually more awesome kind of. O'Death then play NYU with Battles and the Dirty Projectors the next night (btw, NYU students can also now buy tickets for the Thermals and Hold Steady).

And if you're just going to Soulwax at 11, don't be late (like Big Stereo - see above) - Modular's newest signing from Australia Muscles is opening the show (and all Radio Soulwax shows on this tour). Listen to Muscles at MySpace (or use one of the links above to get MP3s).

All O'Death and Soulwax/Muscles tour dates below....

* "DJ tour support will be JDH & Dave P. (FIXED/NYC)- the DJs and promoters behind FIXED, a highly acclaimed party in New York City at Studio B. FIXED has hosted artists such as Simian Mobile Disco, Justice, LCD Soundsystem, Mylo, M.A.N.D.Y, The Presets, The Rapture, Erol Alkan, Lindstrom, Optimo, and more."