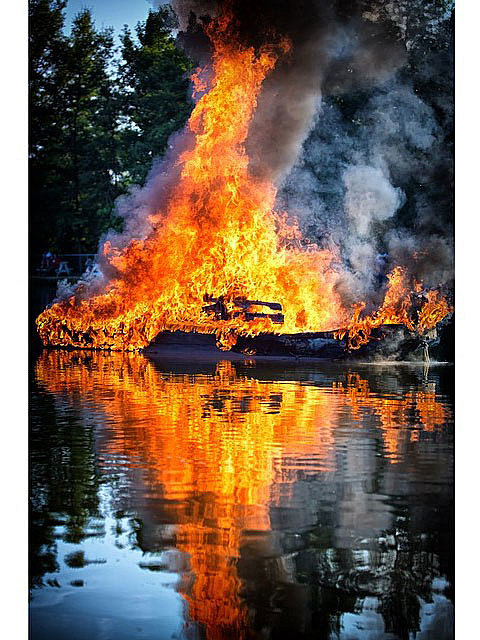 GWAR-B-Q took place over the weekend, beginning with a special Viking memorial to former singer Dave "Oderus Urungus" Brockie. Jello Biafra and Randy Blythe paid their respects, with the latter snapping the pic of Oderus's gear set ablaze above on his Instagram while sharing these words:

Tonight we sent Oderus home in a fitting manner at the public memorial for Dave Brockie. A blazing Viking ship with Oderus laid out in it, the cuttlefish pointing proudly straight up. Watching my friend Dave's costume go up in flames in front of a thousand fans was so much more intense for me than the private memorial for friends & family we had April Fool's Day. I spoke at both of them, as GWAR asked me to, & both times as I spoke I was sad. But watching his alter-ego burn tore me up way more than the first memorial, maybe because there was Dave, the human who was my friend who just "left us"- I never saw his body- & then there was Oderus, who was something entirely else. To watch his stage gear burn was like watching part of my life literally go up in flames. I was sobbing my eyes out as I took this photo. It was just a super-intense moment. Very beautiful, but overwhelming. Fly free, Oderus- you are missed

You can also watch a video of the event below.

The festival started in earnest the next day with performances from Body Count, Hatebreed, Goatwhore, and a fresh off a court victory Misfits, culminating in the new-look GWAR taking the stage. All members shared singing duties and Mike Bishop was indeed brought back into the fold to take the lead on a few songs. This will probably be what GWAR will look like at Riot Fest and their likely upcoming tour. And, crisis adverted, it's not bad at all. A seriously shaky fan-shot video of the full set also appears below.

merch and
food options, you could also get your genitals pierced.

Congrats? Definitely check out her Twitter feed for more.

The Oderus send-off along with the full GWAR live set appears below.