DOWNLOAD: Of Montreal - If I Faltered Slightly Twice (MP3) 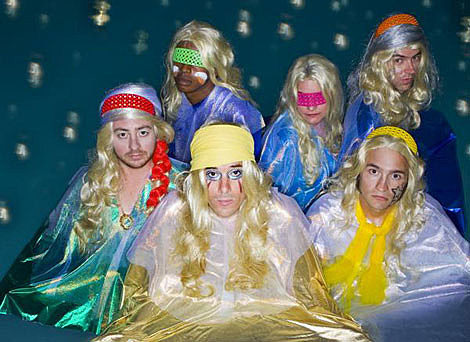 The Jon Brion Remixes album will include this track, two JB versions of the rapturous "An Eluardian Instance," a longer version of this "Gallery Piece" remix, and an instrumental version to boot. It comes out 1/6 digitally and 1/27 on CD/LP via Polyvinyl. [Stereogum]

Tickets are on sale (@ noon) for the Of Montreal show happening at Music Hall of Williamsburg in Brooklyn in December.

NPR is streaming the entire recent DC Of Montreal show. It took place right around the time they played an over the top show at Roseland Ballroom in NYC.

Of Montreal also just announced a whole bunch of 2009 international tour dates. A video of a group performing an Of Montreal song A Capella, and all dates, below...

The Stereotypes - Wraith Pinned to the Mist (A Capella)