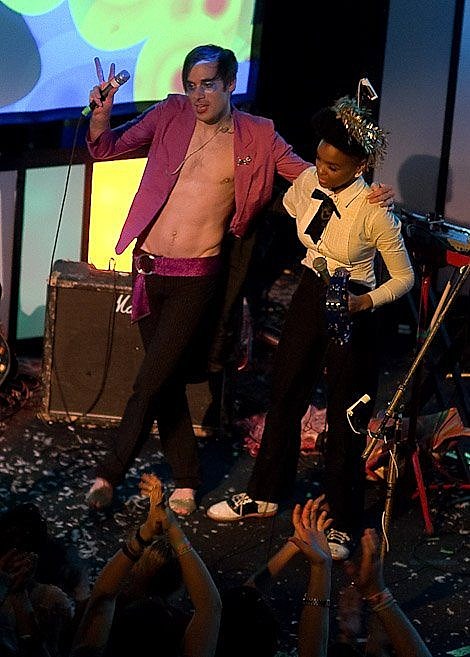 Of Montreal just had an exciting weekend. Jon Brion (who they have collaborated with) opened for them at the Fox Theatre in Oakland on Friday (7/24). Then they (and Dengue Fever) opened for Grace Jones at Hollywood Bowl on Sunday (7/26)...

"Kevin Barnes, the Georges Bataille-reading, polyamorous frontman, turned in a focused performance with an occasional feisty edge. Though the Athens, Ga., band is a keen, aesthetic fit with Jones, its circus-like hysterics and verbose lyrics didn't seem to capture the audience, who seemed mostly unfamiliar with the band and impatient for the main act." [LA Times]

Janelle Monae joined Of Montreal on stage during their Hollywood Bowl set for "For Our Elegant Caste" and the Bowie cover "Moonage Daydream". Janelle did the same when she opened for the band at all three of their Brooklyn shows in April (all three were at Music Hall of Williamsburg).

Of Montreal's next NYC show is about to be announced, and that will take place on September 18th at Terminal 5. Tickets will cost $25 in advance ($30 day of show).

Janelle Monae's next NYC show is with Erykah Badu on Governors Island.

Grace Jones's next NYC show is this Thursday at Hammerstein Ballroom. No opener that I know of at that one. Tickets are still on sale.

Of Montreal's new video for "Mingusings", some videos from Hollywood Bowl, and all tour dates below...

Of Montreal "A Sentence of Sorts in Kongsvinger" Live Hollywood Bowl 7.26.09