of Montreal at Savannah Stopover 2013 (more by Dominick Mastrangelo) 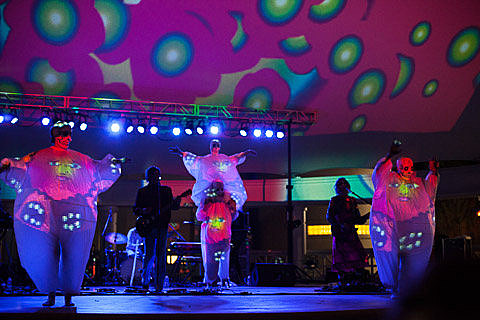 Pop weirdos of Montreal have a new album, lousy with sylvianbriar, due out on October 8 via Polyvinyl, and while no touring plans have been revealed for it yet, the band did announce two NYC shows. Those shows happen on October 27 and 28 at Music Hall of Williamsburg. Night 1 is being opened by Surface to Air Missive and night 2 is being opened by Seattle's surfy La Luz. Tickets for both of those shows go on AmEx presale today (7/31) at noon with a general on-sale beginning Friday (8/2) at noon.

Those are of Montreal's only two currently announced dates. UPDATE: A full tour was just announced (via Pitchfork), and most shows are with La Luz. All dates are listed, along with a stream of the single from the new album, "fugitive air," below...