Off! (photo by Lindsey Byrnes) 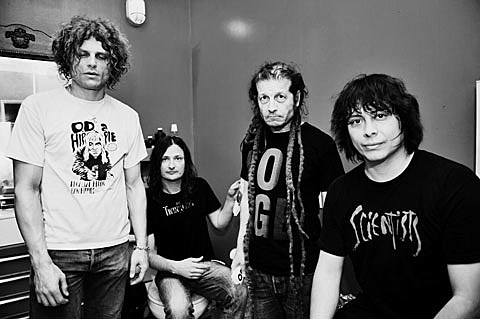 Whether or not the band name Off! is a not-so-subtle reference to another band that featured the great Keith Morris and dealt destruction to the insect populi, one thing is certain, they rule. Besides the incredible vocalist for Circle Jerks/Black Flag, punk supergroup Off! also features a killer lineup including Dimitri Coats (Burning Brides), Mario Rubalcaba (Earthless/Hot Snakes/Rocket From the Crypt) and Steven McDonald (Redd Kross) and the foursome have announced their debut material to be released with Vice Records!

Off!, who you may have caught at SXSW this year, will release the accurately titled First EP via limited edition 7" inch on October 12th. Featuring art and an exclusive poster courtesy of Raymond Pettibon, aka the evil genius behind Black Flag's iconic album covers, the release is the first of four 7"s to be compiled on the First Four EPs (another Black Flag nod) due on November 23rd - a collection of 16 songs which will each feature its own Pettibon sleeve art.

As the tour dates indicate below, Off!, in addition to playing FYFFest and Riot Fest this year, has announced their involvement in Austin's Fun Fun Fun Fest (happening November 6th and 7th). For those of you counting at home, that brings the list of confirmed FFFFest bands to Woven Bones, Suicidal Tendencies, Slick Rick, Best Coast, Dirty Projectors, Cap'n Jazz, The Gories, Yelle, Snapcase, The Dwarves, High On Fire, and The Hold Steady! Stay tuned for more lineup announcements for the great Texas festival.

Meanwhile, Mario Rubalcaba was NOT part of the recent (and impromptu) Hot Snakes reunion that took place on July 29th at an Obits/Night Marchers show in San Diego, CA (the bands were on tour together).

You can view video of the three Hot Snakes songs from that set, as well as all Off! tour dates & a video from their first show in LA, below...