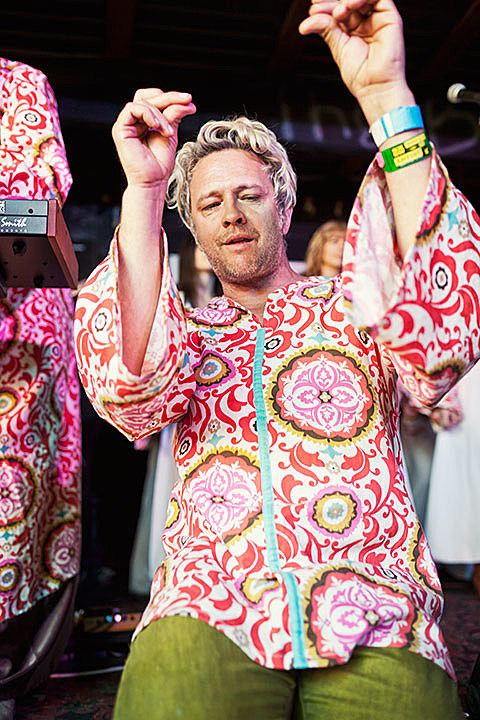 As you may know, Bonnaroo is happening this weekend in Manchester, TN, kicking off today (6/13) and going through Sunday (6/16) across a dozen or so stages and tents. Everybody knows about the big names -- that include Paul McCartney, Bjork, Tom Petty and many more (stream it live) -- but there are some  cool things going on away from the main stages, too

The Polyphonic Spree (who played a BVSXSW day party this year) play the Cinema Tent tonight (6/13) at 11 PM, performing The Rocky Horror Picture Show soundtrack in its entirety (!). Then the band are doing a second secret Bonnaroo set at 2 AM by the Fountain.

Chris Gethard, who famously walked to Bonnaroo from L.A. last year, will be doing a bunch of things there this year:

Last year I did The Chris Gethard Show which is an experimental, crazy thing, but this time it's just stand-up. I have a pretty in-depth exploration of my Bonnaroo experience last year that I may tell on stage and see how the crowd likes it. I would call my act stand-up but I'm less of a joke writer and more on the confessional, philosophizing or whatever end. They're true stories. I'm playing Thursday and Friday. Then Saturday I'm hosting a look at public access TV with clips from my show and other public access shows that inspired mine. Things like Uncle Floyd--which I grew up with in New Jersey--and Chic-a-Go-Go from Chicago. Also, clips from my favorite prank call footage on various public access shows. And a lot of it will be clips from The Chris Gethard Show that I'm really proud of. But overall I just want to have fun and meet a lot more people. - [Fuse]

Other comedy things -- besides what BV's Klaus Kinski already wrote about -- include The Improvised Shakespeare Company, who combine improv comedy with Elizabethan theatre, will be performing with Bob Saget for two performances on Sunday. Should be interesting.

And last but not least, John Oates is the butt of a lot of good-natured ribbing, but you'll get to hear his side of the story when he performs and participates in a Q&A on the Solar Stage on Friday at 5 PM. Here's you chance to learn the real story behind "Maneater" without constant interjections by Daryl Hall.

Check out the full Bonnaroo Schedule (scroll down, down down for smaller stages) for more.