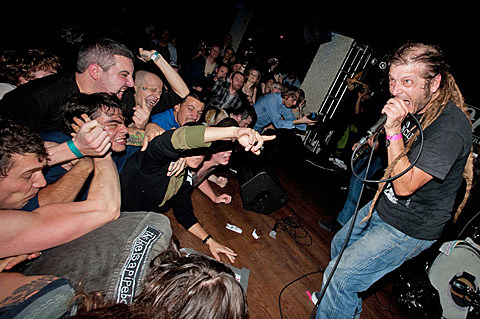 "We're definitely gonna tour, there's no doubt about it. There's too much excitement in the air, the reaction has been too great for us not to take advantage of all the opportunities that are coming our way. We're definitely gonna tour. We'll go to Europe, he's never been to Japan or Australia, he's never experienced some of the things that he should've experienced so we're gonna do that in this band. If a bigger band asks us to open up and play hockey arenas and they're good, we're gonna do it." [Dimitri Coats]

OFF! will hit the road for a proper U.S. tour, and with the incredible Trash Talk! The tour kicks off in Atlanta on March 22nd and scoots along the East Coast, tagging Santos Party House on March 26th before terminating in Minneapolis.

OFF!'s is also playing the sold out Coachella Festival. Trash Talk are meanwhile heading down to Australia. All dates below...