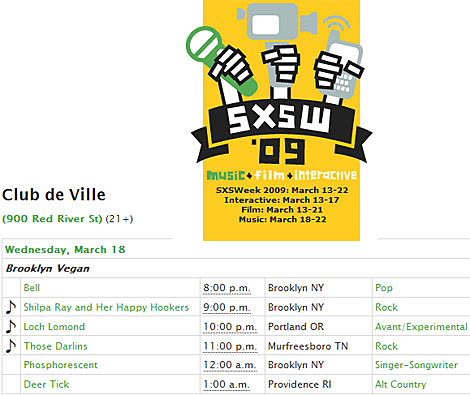 If you'll be in Austin for SXSW this year, especially if you have a badge, please stop by Club De Ville on Wednesday night, March 18th, 2009 for the official BrooklynVegan showcase (aka a show aka a concert with six bands that is officially a part of the overall South by Southwest festival). If you don't have a SXSW badge, this show will cost you a modest fee at the door. This is who we've got on the bill...

Starting things off. She hails all the way from Brooklyn... it's Bell who will have just finished a tour with Asobi Seksu. (8 PM)

Following Bell is Brooklyn's very own Shilpa Ray and Her Happy Hookers. Some say Shilpa has gotten a lot of attention around here lately. That is true. (9 PM)

After Shilpa, it's Portland, Oregon's Loch Lomond (with special guests). You may have caught Loch Lomond while they toured the country with The Decemberists. The Decemberists just so happen to be playing across the street at Stubb's, a few hours later, on the same SXSW night. (10 PM)

Not to stereotype, but girl power continues with the fourth act of the night. This also marks the beginning of the "alt-country" portion of the evening. It's Those Darlins. Maybe you saw them on their current tour with Dan Auerbach of the Black Keys.
(11 PM)

Next up... I've mentioned it a few times now: Phosphorescent will perform their/his new Willie Nelson tribute album, "To Willie", from start to finish . By the time this show happens, Phos will have done the same thing in Brooklyn, LA, and San Francisco. After SXSW, they may never do it again. (12 AM) Don't miss it...

...AND then, don't leave yet, because last but not least, Deer Tick (reunited with Those Darlins for the millionth time) are going to finish the night off. This closing performance feels especially special because this is the second year in a row that Deer Tick are playing the same showcase at the same venue, except last year their set time was much earlier. (1 AM)

NOTE: This is one of MANY SXSW events we planned, produced, or BrooklynVegan are just somehow involved in this year. I'll announce all of them ASAP, including the free day parties, and one more of them now...

Bill Pearis, currently best known for his weekly column "Week in Indie", will be representing BrooklynVegan.com on a SXSW panel about music blogs on Thursday, March 19th at 11am at the Austin Convention Center. The event is for SXSW badge holders only.

Phosphorescent - "At Death, A Proclamation"