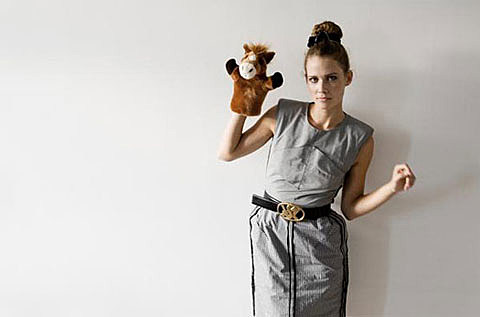 By the time I arrived at Brooklyn Bowl on November 8th, I had missed Fatty Acid and The Courtesy Tier. With five bands on the bill, I (perhaps unfairly) decided that 3 out of 5 wasn't too bad.

Based on the enthusiasm and size of the crowd, it may have made more sense to save Oh Land for last, but the recent Brooklyn transplant was third on the bill. Luckily, I made it in time to check out the Danish vixen's set.

Oh Land's performance unfolds like a music video. At the beginning of each song, Nanna Øland Fabricius taps out a few notes on the keyboard or on her electronic drum kit just to show us that she can. But then she walks away, and the music magically continues (despite the fact that no pedals seem to factor into the equation). For an artist whose act seems to rely heavily on eye candy like light-up drum sticks, talking balloons, and whimsical outfits, Oh Land's slower songs drag a bit, but she shines during her dancier numbers. Oh Land's drummer, Hans Hvidberg-Hansen, may play an integral role in the music, but with Fabricius parading around the stage, his presence hardly registers.

Oh Land's electro-pop stylings are not groundbreaking, but her music and accompanying presentation are definitely worth a listen (and a look). After being pleasantly surprised by Oh Land's performance during CMJ, her equally short set time at Brooklyn Bowl (just 24 minutes) was a bit of a let down, but she still managed to wow the crowd in the short time she had. (An exchange between two girls nearby: A:"She's going to be so famous." B:"I know. She's so cute." A:"Should we start hyping her up?") And so it begins.

Maybe Oh Land will play a longer set on January 26th at Hiro Ballroom, a one-off date for the artist who is heading out on tour with the reunited Orchestral Manoeuvres in the Dark in March. Tickets are still on sale for the Webster Hall show. Oh Land is also playing SXSW. All dates and some videos below.