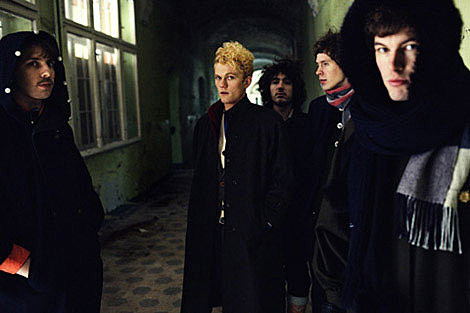 Denmark's Oh No Ono are in town this week for their first-ever NYC shows, the first of which was an in-store at Sound Fix last night. Anybody go? I'm seeing them tonight at Mercury Lounge, where they'll be playing with Bear in Heaven, ArpLine and Jaguar Club. Tomorrow they're at Union Hall with Depreciation Guild and Hooray for Earth. Oh No Ono's new album, Eggs, is impressively bonkers and almost impossible to describe succinctly. It's psychedelic, baroque, glammy, 70's AM, with some synth pop and the occasional church choir thrown in. And very catchy stuff too. Maybe they're the Sid and Marty Kroft version of Mew? Hear it for yourself -- there's two tracks at the top of this post. I can't wait to see how they pull all this off live.

Tonight's Mercury Lounge show is sold out, no surprise given they're playing with Bear in Heaven. Tomorrow's Union Hall show is just as solid though, with eight bit shoegazers The Depreciation Guild who will soon head off with Pains of Being Pure at Heart (Kurt Feldman's in both bands) for a tour of Japan. Also playing are Hooray for Earth, who neatly straddle the line between electronic pop and electrified rock. The sound is familiar and inviting yet I don't seem to be able to come up with any obvious comparisons to another band, which is a good thing. They've got a new EP, Momo, that is currently only available through Emusic (the latest in the Emusic Selects series) but I wouldn't be surprised if they were selling it at their merch table. It's definitely worth picking up. You can download the lead track, "Surrounded by Friends," at the top of this post. 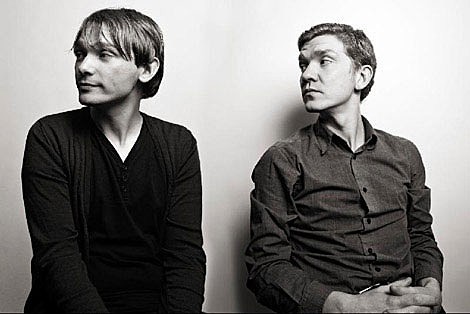 After cancelling their performance last-minute at Skippy's birthday party back in December, Field Music are back for their make-up date this Saturday (1/30) at the Bell House. If you bought tickets before, they're still valid. And if you haven't got tickets, they're still on sale. The Brewis brothers' new album, Field Music (Measure), is out February 16 and here's what I wrote last time:

...it's another knockout from the Brewis brothers, 20 tracks that further refine their distinctive mix of nervy new wave, prog, krautrock, tea party pop and whatever else they're into at the time. It's a Field Music album, no doubt about it, but it's less buttoned up, more rhythm heavy ("Let's Write a Book" shows that one of them's been listening to Can) and willing to give anything a try. If you've never seen Field Music live before, you should definitely come out, the Brewises are shit-hot musicians as well (David is an especially impressive drummer). There used to be a lot of switching instruments when they were a trio, but now as a four-piece I wonder if that'll still happen.

It really is a great album, probably the best thing the Brewis have done together or apart. You can download "Measure" at the top of this post which is reminiscent of Peter Brewis' The Week That Was project from 2008. Additionally, Field Music have announced dates for a spring North American tour opening for The Clientele that includes a March 23 stop at Bowery Ballroom. All Field Music/Clientele tour dates are at the bottom of this post. 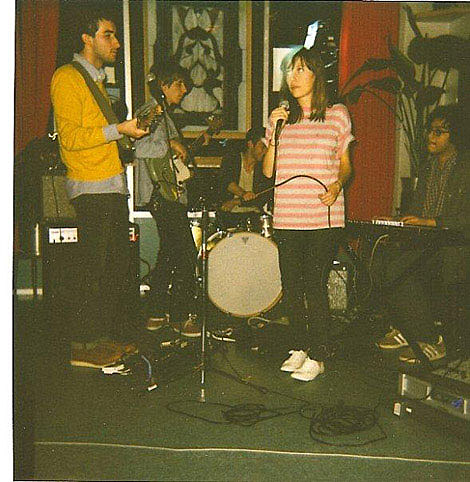 Friday (1/29) at Bruar Falls is a band a lot of people seem to be talking about right now: Twin Sister. To me, there's a little '80s delay-pedal shimmery-ness to them (Cocteau Twins, Disintigration-era Cure), nods to '70s muted-fretboard soft rock soul, as well as a pastoral folk thing going on. Basically, dreamy and beautiful stuff. They also remind me a bit of Montreal's Luyas who, if they ever make it down this way, Twin Sister would make a perfect double bill. Thier EP from last year, Vampires with Dreaming Kids, is a free download from their website, which we link to at the top of this post. A new EP titled Color Your Life is due in March on Infinite Best Recordings. There's a video trailer for the EP at the bottom of this post.

Twin Sister have a bunch of shows coming up. In addition to Friday's Bruar Falls -- which is free, btw-- they're also playing Saturday (1/30) at the loft above Richie's Gym which is out by the Myrtle JMZ stop. Both those shows are being presented by busy blog Chocolate Bobka and also feature Austin's languid, reverby Pure Ecstasy. The Bruar show also has Family Portrait and Baltimore's Run DMT. Twin Sister have a bunch more shows lined up in February, including 2/25 at Cameo with Toro Y Moi. All dates are at the bottom of this post.

A few other weekend picks, videos and tour dates below... 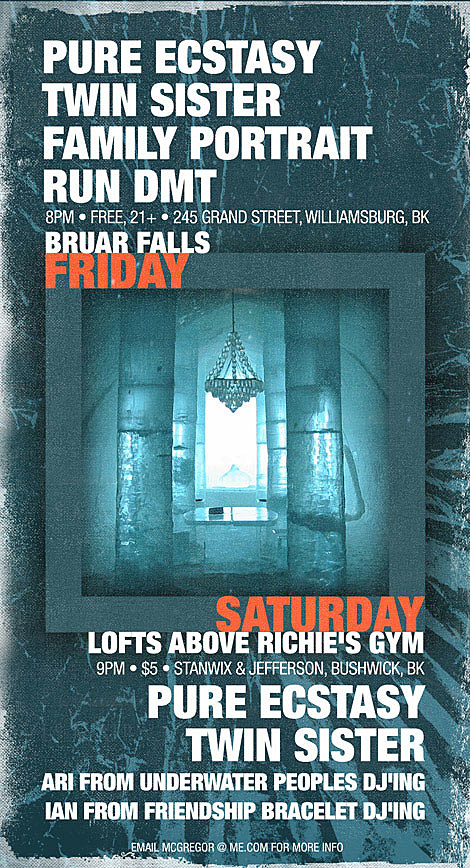 Here We Go Magic's "Tunnelvision" was one of my favorite tracks from last year, and they put on one of the best Seaport Sets last summer. Tonight, they play Music Hall of Williamsburg with Midnight Masses and Glass Ghost.

Javelin, whose new album will be out in April on Luaka Bop, headline a pretty good line-up at The House Of Yes, also featuring Nuggets-loving Shark?, psychotronic rock band Dinowalrus, the soulful Ava Luna and dreamy duo The Shivers.

Brooklyn band Diehard aren't trying to hide their love of '90s. They do an entire set of covers of that golden era of indie/alt at Union Hall. Expect Pavement, Archers of Loaf, Superchunk... even Oasis. 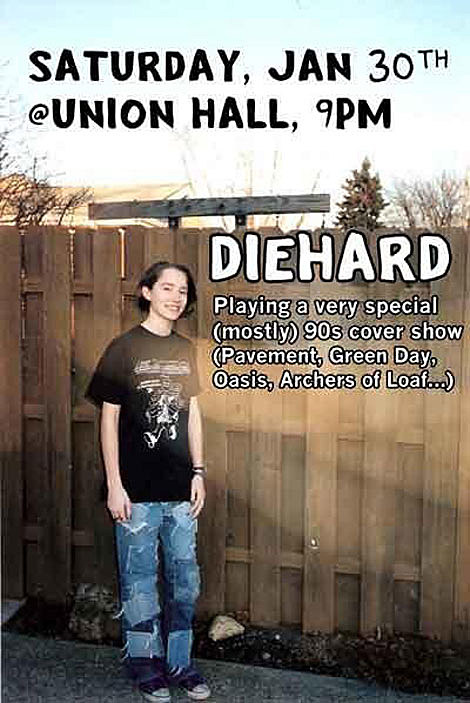 Darlings, who also love the '90s, play a free show at Bruar Falls with Rifle Recoil.

That's it for this week. Flyers, videos and tour dates below.

Hooray for Earth on ABC's "Amplified"

Field Music - "Them That Do Nothing"

Color Your Life from Twin Sister on Vimeo.