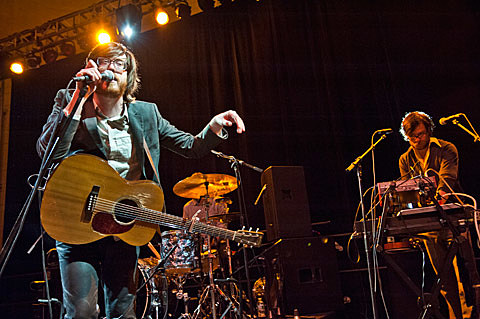 Austin folk rockers Okkervil River were in NYC back in April for a show at Grand Central Terminal, and they've just announced that they'll return to the city for a show at a more traditional venue on September 26 at Terminal 5 with Black Joe Lewis & the Honeybears and Pickwick. A full tour hasn't been announced but the show falls in between their appearances at Boston Calling and ACL Fest, so it wouldn't be surprising if one is announced soon. Tickets For the T5 show go on sale Friday (6/7) at noon.

Seattle's Pickwick were recently in NYC for a sold-out Mercury Lounge show with Basia Bulat (which Pickwick headlined), and they released their debut album, Can't Talk Medicine, earlier this year. It features a cover of Richard Swift's "Lady Luck" with guest vocals from Sharon Van Etten, plus twelve original tracks of soul-inspired twang-rock. You can watch the video for "Lady Luck," along with a stream of the entire album, below.