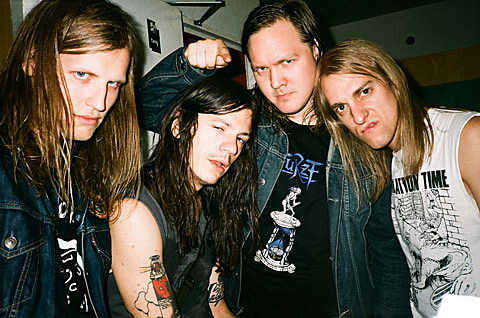 I first came across the name Okkultokrati when it was uttered in the same breath as Kvelertak and the Norwegian collective known as Black Hole Crew which contains Dark Times and Haust. Between that Black Hole association and their involvement in a split with High-on-Fire meets-Unsane badasses Arabrot, it was clear that they shared an aesthetic and influence from bands that I admired.

Okkultokrati is definitely rooted in punk, but in the same way that Venom and Motorhead is. Slithering, metallic black rock and roll with moments of crushing doom is the central theme on Snakereigns, the band's new LP recorded by Emil Nikolaisen of Serena Maneesh and is due October 26 via Fysisk Format. The record recalls the crunch of modern "Boss Heavy Metal" hardcore/grind, epic doom and the great Midnight while keeping the latter's fun vibe. Raise your fist to the first track to emerge from Snakereigns, "No Ouroboros," and look for the LP in October. Its a ripper.

So far no US dates to speak of. Until then, stream some new and old Okkultokrati below.