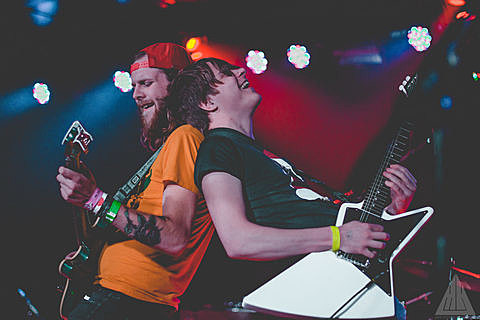 Earlier this year, Old Gray released a split with the mathy Tiny Moving Parts on Kind of Like Records, Broken World Media (Derrick from TWIABP's label) and Dog Knights. One of Old Gray's contributions, "Clip Your Own Wings," just got the video treatment (courtesy of Zak Ickes and Nolan Manning) which shows the band at a dimly-lit live show. The song itself is the kind of atmospheric screamo we've gotten from bands like Touche Amore and Pianos Become the Teeth, with most of it being little more than Cameron Boucher screaming over clean guitar until the band finally builds up to a post-rock crescendo. The video makes its premiere in this post and can be watched below.

We also just caught Cameron fronting his poppy punk band Sorority Noise (and filling in for Brendan Lukens of Modern Baseball), along with Tiny Moving Parts and The Hotelier at Marlin Room at Webster Hall (pics).

Video, a full stream of the split, and Old Gray's list of tour dates (none in NYC) below...