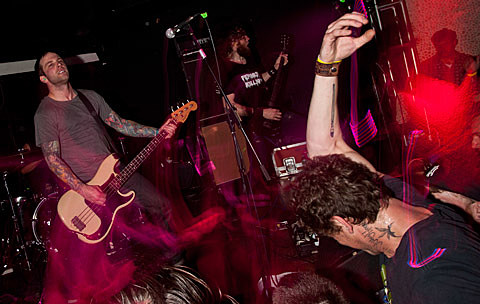 Old Man Gloom, the band with members of Converge, Cave In and ex-Isis who released their newest album The Ape of God last year on Profound Lore, will now be supporting the album on a short tour this September. Opening the tour will be a reunion from Mare, the short-lived Canadian sludge band who released an EP on Hydra Head before calling it quits in 2007. (Their drummer, Caleb Collins, has spent time since their breakup playing in Circle Takes the Square.)

The tour begins in NYC on September 3 at Saint Vitus and wraps up about a week later in Cambridge. Tickets for the NYC show go on sale Friday (5/15) at 10 AM.

Old Man Gloom also play Psycho California this weekend with Sleep, Pentagram, Kylesa, Cave In, Eyehategod, and more. All dates are listed below...