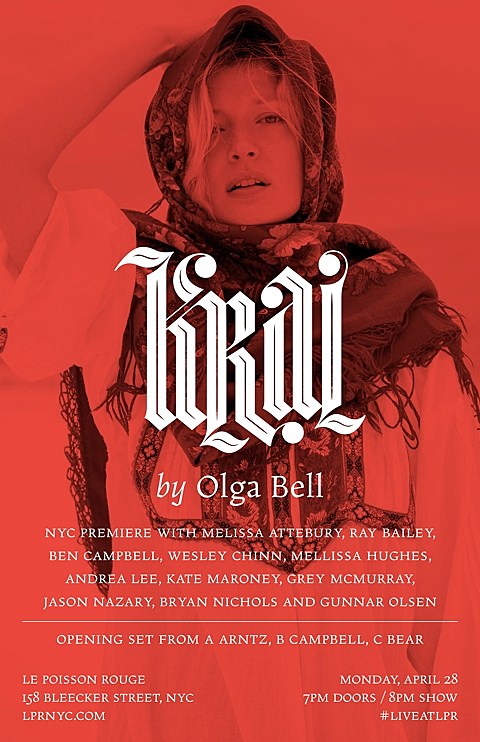 Olga Bell, who is currently a Dirty Projector and just played MoMA PS1 this past weekend (3/30), is releasing a new solo album, Krai, on April 29 via New Amsterdam Records. The album is a song cycle sung in Russian (her native language), and the description reads:

Inspired by the lesser-known corners of Bell's homeland and written entirely in her native Russian, Krai is Bell's second LP and first large-scale composition.

...Krai (край) is the Russian word for edge, limit, frontier or hinterland. Present-day Russia is divided into a myriad of 'federal subjects', including nine krais. In this capacity the term is a political designation, like 'territory', but for the earliest Russians these places represented both the promise and terror of the vast unknown.

While much has been written about Russia's major cities, Olga Bell's Krai is concerned with the rest of the map: the wilderness, the towns, the inhabitants and their stories. From the Cossack melodies of Krasnodar Krai in the West to the Chukchi drumming of Kamchatka Krai in the Russian Far East, Krai is a journey across the Eurasian landmass in forty minutes.

Preview Krai by listening to one of its tracks below.