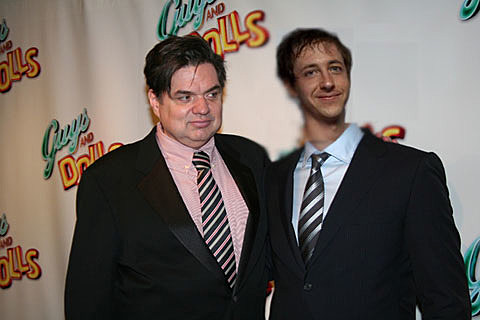 NY MAGAZINE: What was 2010's cultural highlight for you?

Oliver Platt: Panda Bear's "Slow Motion" [B-side to July's 7" single "Tomboy"]. I'm a huge Animal Collective fan, and frankly, if Animal Collective had released something this year, it would be my pick. [2009 EP] Fall Be Kind was one of the highlights of last year. They locate so much soul in electronic music. But I do think that Panda Bear -- Noah Lennox is his real name -- is a freaking musical genius. He sounds like Brian Wilson and he's got this natural gift for harmony. I love Animal Collective, but to me his stuff goes quicker to that place at the back of your neck, where your brain stem starts to buzz. I don't want to sound too druggy here, but it does have that effect. Also, Avey Tare released a solo album this year [Down There] and there was some really amazing stuff on that.

Oliver Platt is probably happy that, according to Pitchfork, Deakin is back in Animal Collective (though as animalcollective.org points out, he arguably never left). He's also probably looking forward to Deakin's solo debut, coming in 2011 via Paw Tracks. Look for Oliver in the audience at the New Museum tonight (12/10). Tickets are still available.

Animal Collective's only upcoming dates are Primavera Sound in Spain in May, and an ATP that they're curating in the UK the same month.