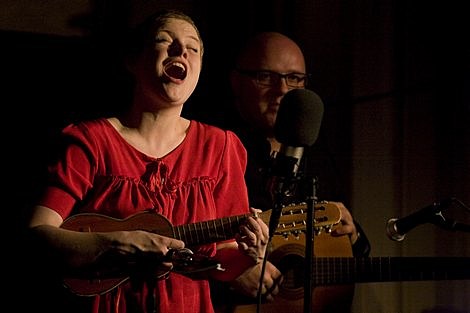 Last Friday, 300 lucky guests crowded into Housing Works Bookstore for a very special installment of the bookstore's Live From Home concert series: the occasion was a collaboration between musical legend Björk and the up-and-coming Brooklyn band The Dirty Projectors. It was a night of never before heard music to benefit Housing Works Inc., which provides direct services for homeless New Yorkers with HIV and AIDS.

Guests drank beer from Whole Foods, Hendricks Gin and Reyka Vodka cocktails and wondered what lay in store. Björk and the Dirty Projectors each chose an opening act: Olöf Arnalds, a singer from Björk's native Iceland, and Kurt Weisman, from Vermont were introduced by the headliners. Hosting the evening was bookstore board member and Stereogum writer Brandon Stosuy...

...The music was transcendent, and the night was a huge success as a fundraiser-raising $40,000 for Housing Works, Inc. Thanks to everyone who helped make it such an amazing night."
[Housing Works press release]

That singer from Bjork's native Iceland (Olof Arnalds) will be back again in June, this time to play two shows during Brooklyn's first-ever Northside Festival. And the dates are:

A Northside Festival badge will get you (first come, first served) into either show. Advanced tickets are also available for both shows (Union Pool and Music Hall).

The Tallest Man/Vanderslice/Olof/TBA show at MHOW is now one of two BV Northside Fest shows. The 2nd one is, courtesy of Black Bubblegum, much heavier.

Olof covered Bjork at the Bjork Housing Works show. Watch that video, and others like it, below...