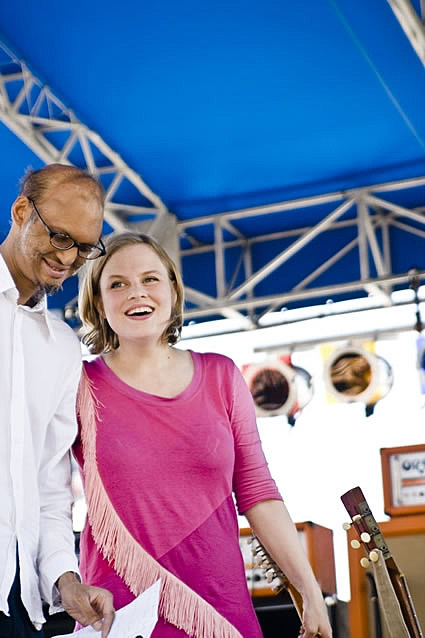 Ólöf Arnalds's set time was 2:30 at the East Village Radio Festival at South Street Seaport on Sunday (Sept 7). That's when I planned to get there, so naturally I arrived at 2:50. Luckily I was still able to catch a couple of her instantly-recognizable songs from her 2007 Sigur Ros-produced album Við og við.

The crowd watching her was small, and included many random passerbys including tourists and some homeless dudes with 40's (the crowd filled in later by the time the Vivian Girls took the stage). That didn't stop Olof from seeming excited to be there. She even introduced one of the songs with a story about her younger sister who she wrote the song for twelve years ago. The song urged her sister to be creative, and now at 20 years old, she was just accepted into graphic design school. She asked us to give her sister (who I don't think was in attendance) a hand. We all clapped for her sister.

Kind of an Icelandic Joanna Newsom, Ólöf has the kind of voice people either love or hate. The Seaport security guard in front of the stage definitely seemed to be in the latter category. I like it, but I didn't see enough of her live show to say she was amazing. That said, I never wanted to see Joanna Newsom perform outside, and Ólöf is probably also better off in a darker enclosed room with great acoustics. Luckily she is playing two such places before she goes home to Iceland.

Tonight she performs her entire album at a special show at (le) poisson rouge...

On September 9, Skuli Sverrisson and Olof Arnalds and will debut their respective albums, Seria and Vio og Vio in full at Le Poisson Rouge in New York City. Seen as brother and sister albums, each was voted Best Alternative Album at the Iceland Music Awards as well as Record of the Year at Iceland's biggest daily newspaper, Morgunblaoio. Olof played an important role on Skuli's album Seria, singing her own lyrics on three songs as well as playing guitar, viola, charango, koto, and glass. Skuli in turn was influential in bringing the various players together to make Olof's debut album, Vio og Vio.

With Skuli living in NYC and Olof in Reykjavik, the two have been unable to bring their albums together in the live domain. However, Olof's recent addition to the East Village Radio Festival lineup offered them one day (9/9) in their disparate tour schedules to make this happen. Joining them on stage for this historic show will be a glittering array of guests including Laurie Anderson, Peter Scherer, Okkyung Lee, Hilmar Jensson, Shahzad Ismaily, and Nico Muhly.

I don't know how she met all those cool Americans, but I do know that Nico Muhly is friends with Sam Amidon and that Sam and Shahzad Ismaily are both Doveman band members. If you haven't noticed already, that was also Shazad and Sam playing her at the Seaport, and Sam is billed to play solo at her 3rd NYC show next Tuesday in a church with Kria Brekken (who has a connection to Olof through Mum).

In June she opened for Sigur Ros and Bjork in Iceland. Shahzad also played with her at that show. Tour dates and more Seaport pics below... 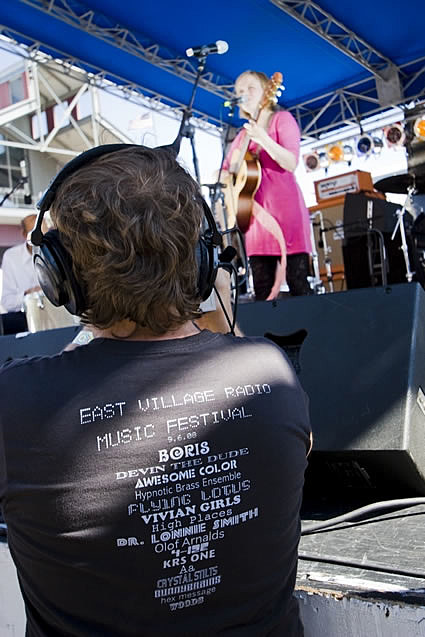 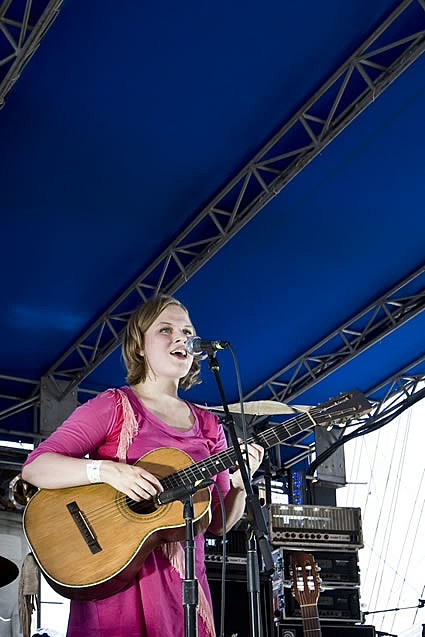 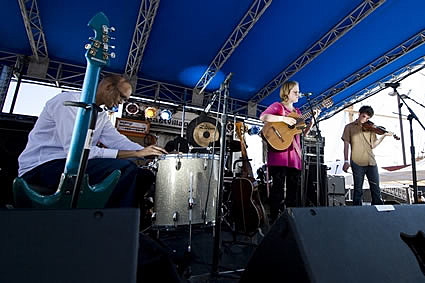 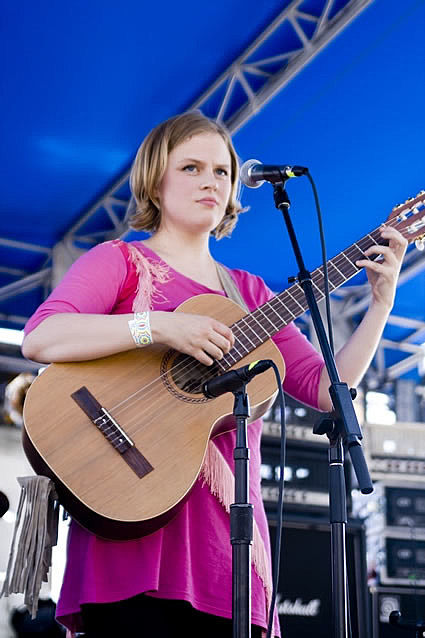 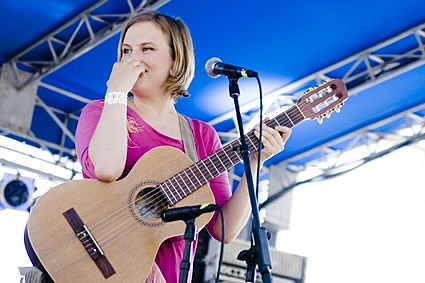 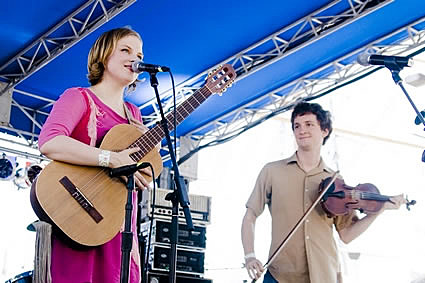 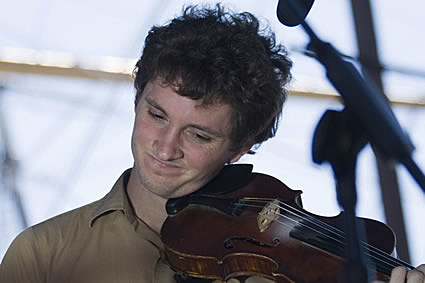 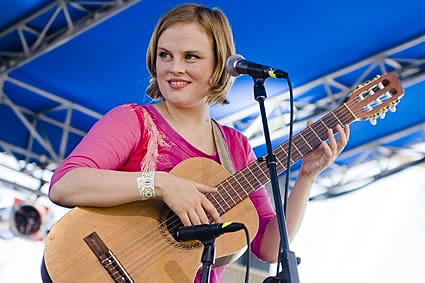 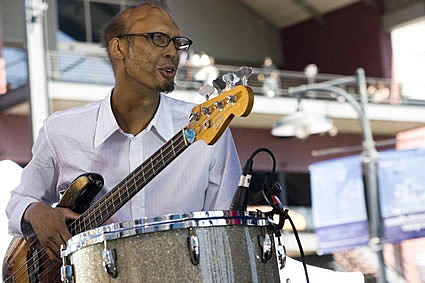 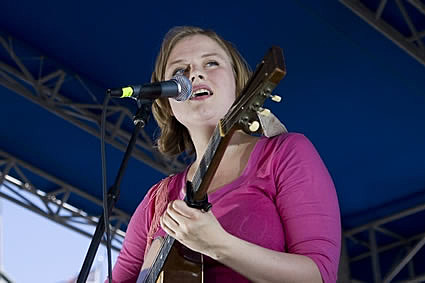 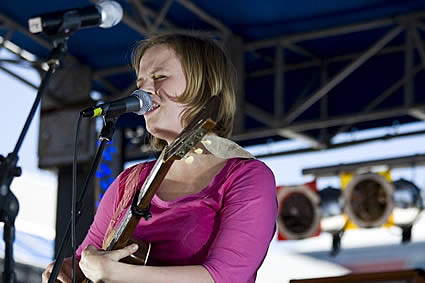 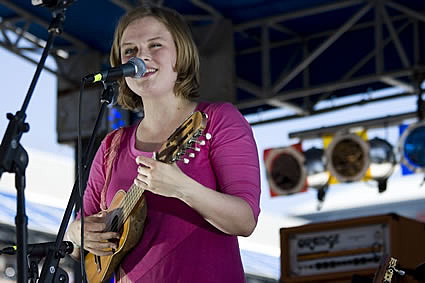 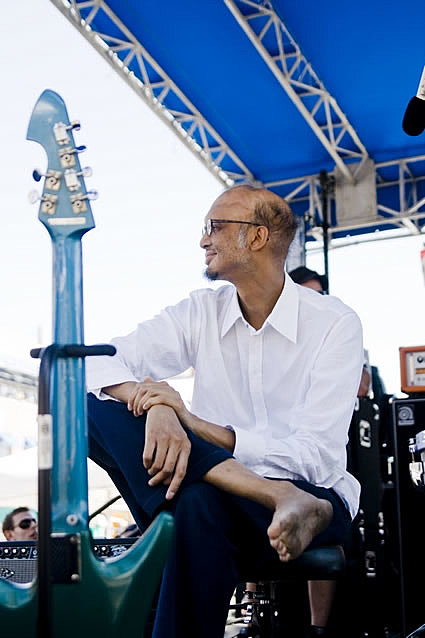