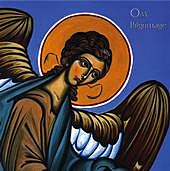 Om's new album Pilgrimige is out now on Southern Lord. Recorded at Electrical Audio by Steve Albini, the four song record is about 32 minutes long - Om albums might be short, but Om songs run long.

"Metal and drone's rhetoric tends to prize nature as awesome above all, so here goes: if some bands are earthquakes, Om are erosion-- slow, massive, patient." [Pitchfork]

Om plays Europa in Brooklyn tonight (Nov 14, 2007). Then they go to Philly tomorrow, and then they're back in NYC on Friday to play Knitting Factory (again). I have a couple of pairs of tickets to give away to Europa tonight. E-mail BVCONTESTS@HOTMAIL.COM right now (subject: Om). Let me know what other upcoming metal shows you're looking forward to. Inlude your first and last n name. Two winners will be picked and notified. All tour dates below....