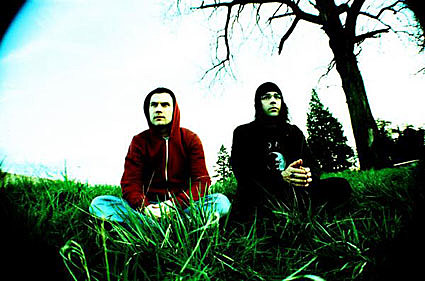 Om is back on its feet after it was dealt a crippling blow in the loss of Chris Hakius. The band, or rather ex-Sleep-er Al Cisneros, has announced new seven-inch on Sub Pop (date forthcoming) featuring the song "Gebel Barkal" AND Om's new drummer, Emil Amos (of touring partners Grails).

Speaking of Grails, they have a new album on the way as well. Take Refuge In Clean Living is due out May 13th on Important Records. They're also playing a NYC show with Nadja at Knitting Factory on June 26th. Tickets are on sale for that.

Still no word on the previously mentioned Om live album.

In other Om-related news, Chris Hakius has also dropped out of the Shrinebuilder project, but have no fear because in his place is none other than Dale f'n Crover (Melvins)! Melvins also have a new album on the way.

The other half of the Melvins, Big Business, are currently at work on a new record produced by Phil Ek with their new guitar/keyboard player, Tochi Kasai (of Altamont -his blog is here). Look for Big Business AND Melvins to hit the road this summer.

Some overseas OM dates below.....