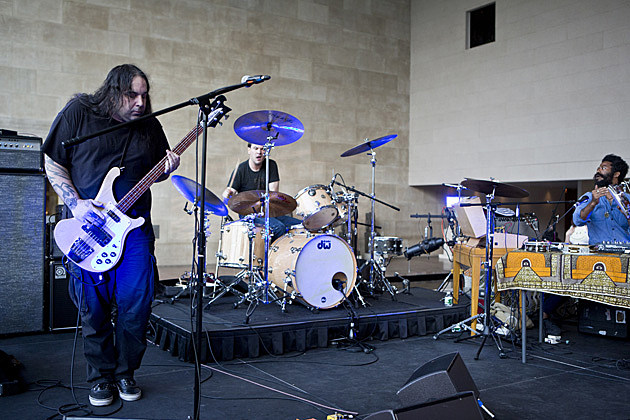 Masters of metallic hypnosis, Om have been touring in short bursts this year. Back in April, they played a handful of dates out west. In October, eastern drone-heads get their opportunity to check out the doomy and dubby trio along with the supergroup Watter that features members of Grails and Slint. The bands have announced stops in places like Boston, Philadelphia, and Chicago. The two will play NYC's Le Poisson Rouge on October 5. Tickets go on sale Friday, July 25. The full tour schedule appears below.

Of course, the reason Om make these short, regional hops is because their members have packed planners. Al Cisneros is set to tour with Sleep in August, including a stop at NYC's Stage 48 on August 25. In case you missed it, Sleep also exhaled a song for the first time in 20 years. Emil Amos -- who also plays in Grails -- put the finishing touches on his solo Holy Sons album The Fact Facer which will see release through Thrill Jockey on September 23 (preorder). And Robert Aiki Aubrey Lowe has his share of engagements under his Lichens moniker.

As for their future stage-sharers Watter, the Zak Riles, Tyler Trotter, and Britt Walford band released their debut This World in May. Like Om, the band emphasizes musical mysticism and weaves together many styles to create expansive soundscapes apt for meditation.

All tour dates are listed, along with a live video of OM and streams from Holy Sons and Watter,  below...