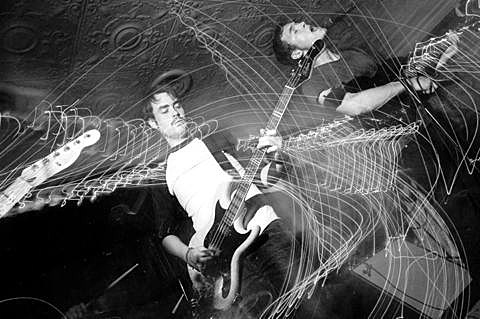 Omaha, Nebraska's Yuppies make dissonant but hooky indie rock with equal parts sloppy charm and smartass attitude. (There is a lot of early-'80s The Fall in there sound.) They make quite a ruckus on their debut album which is out September 17 on Dull Tools, the label run by Parquet Courts' Andrew Savage. If you dig Parquet Courts' Light Up Gold, you should definitely give this a spin, and you can stream three tracks from the LP below.

Yuppies will be leaving the heartland this fall for a tour that it's NYC for two shows. The first is a show at Death by Audio on October 3. Then they'll open for Parquet Courts at Music Hall of Williamsburg on October 2 with The Beets (who have a new single covering Howard Stern) and Future Punx (featuring a member of Fergus & Geronimo, the old band of Parquet Courts' Andrew Savage). Tickets for that show are still available.

All tour dates are listed, along with song streams, below.