Omar Souleyman at Summerstage in July (more by David Andrako) 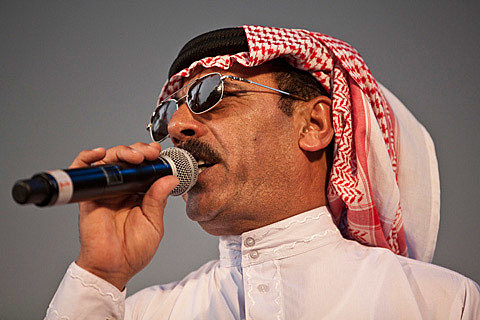 Syrian dabke singer Omar Souleyman recently released the live album Haflat Gharbia on Sublime Frequencies. You can purchase the album at the Sublime Frequencies webstore. The album features recordings of international shows Omar has been playing over the course of the last two years.

He's got some European tour dates scheduled including a few this month and another string of shows in December. Before the December shows, Omar will be in the US for Fun Fun Fest, which takes place in Austin, TX from Nov 4-6. The day before the fest, Omar will play NYC at Santos Party House (11/3). Tickets are on sale now. Opener TBA.

Back in June, we mentioned that Omar was remixing material off Bjork"s upcoming album Biophilia. On July 26, One Little Indian released his remixes of "Crystalline," "Tesla," and "Mawall." Check out a video of a vinyl rip of Omar's "Crystalline" remix, with all dates, below....