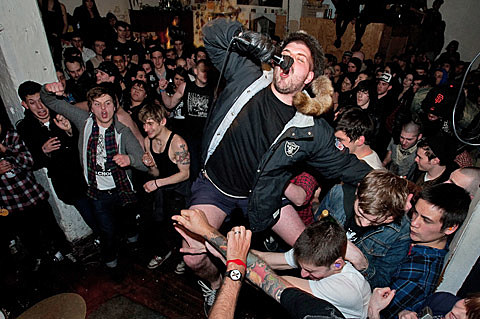 Canadian slam-skank kings Omegas will visit Brooklyn to play the Acheron on June 9th, five days after their already sold out showcase at Emo's during Chaos in Tejas. They will be joined by fellow hardcore stalwarts Dry Spell and Mad World (both from Virginia), as well as Brooklyn's own DBCR. Detractors of high-octane, unrelenting, aggressive hardcore, complete with copious amounts of slamming, skanking, and flying bodies, need not apply.

After Acheron, Omegas will conclude their mini-U.S. tour by heading to the Mendon, MA's RAD Skatepark for a show with Mind Eraser, Kieltolaki (who plays NYC soon too), and Scapegoat.

Omegas' new release Blasts Of Lunacy is twenty-three minutes of hardcore awesomeness, available now on Parts Unknown. The LP calls to mind everything you love about NYHC, injected with some street punk swagger and raw energy. Check out two tracks, "F.S.O.M" and "Peasant Dance" streaming below.