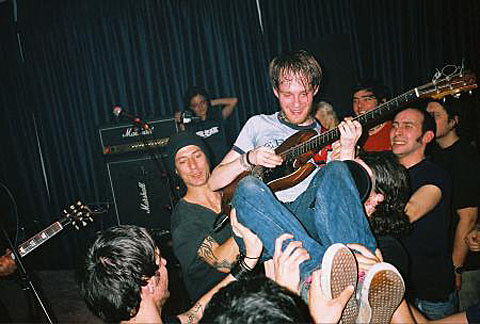 In addition to their previously discussed appearance at Revelation 25, the reunited On The Might of Princes have added another, smaller show at Saint Vitus on October 12 (one day after their Rev appearance) with Tidal Arms, Image Society (ex Encrypt Manuscript) and World's Fair (ex Yes Sensei). Tickets are on sale and going fast.

On The Might of Princes have reunited before, playing sporadically since their split in May 2004. The band members have been involved in other projects such as The Brass, Vehicles, Gracer, Villa Vina, Limbs, Small Arms Dealer, and Primitve Weapons in the time since. Speaking of Primitive Weapons (who no longer use the services of OTMOP drummer Chris Enriquez), the band plays Saint Vitus on August 3rd with Mares of Thrace, Pilgrim and new addition Windhand (unmissable!).