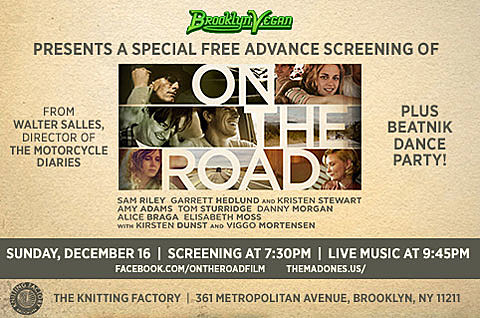 On the Road, the new film adaptation of Jack Kerouac's classic Beat Generation novel of the same name, hits theaters on December 21, but BrooklynVegan is proud to present an advance screening happening at Knitting Factory Brooklyn on Sunday, December 16 at 7:30 PM with live jazz by the Stan Killian Trio beginning right after the movie to keep you in the mood. The screening is totally free to the public. All you have to do is show up. First come, first served.

On the Road was directed by Walter Salles and the screenplay was done by Jose Rivera. They also worked on The Motorcycle Diaries together. It stars Sam Riley (who played Ian Curtis in Control), Garrett Hedlund (Friday Night Lights, Tron: Legacy), Kristen Stewart (Twilight), Viggo Mortensen (The Lord of the Rings), Amy Adams (Junebug), Elizabeth Moss (Mad Men), Kirsten Dunst, Steve Buscemi and others.

Oh, and our screening at Knitting Factory is one of many events happening during "Beat Week". You dig? Movie trailer and full size poster below...