John Vanderslice and St. Vincent (Annie) kicked off their Spring 2007 Tour this past Friday at Doug Fir Lounge in Portland, Oregon. Both John and Annie will be publishing reports from the road, right here on Brooklyn Vegan. Here's the first installment... 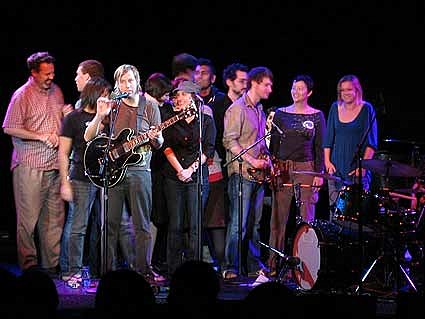 It's been a year since we toured the States, and I've forgotten how lovely this country is. We're speeding through the treacherous hills of Grant's Pass in southern Oregon, and the van is pitching and rolling like a fishing boat in the Atlantic. The inside of the van is lit with the dull glow of iBooks. I'm watching the excellent The Wind That Shakes the Barley. Dan Brennan's phone modem is giving him a healthy 28k, enough to email and surf in slow-motion.

It's dusk, the windows are open, the van is filled with that heavy scent of Pacific madrone. We crest over the pass and drop into an ocean of Douglas-fir and ponderosa pine.

On this tour, we've asked audience members to come up and sing lead and play bass with us. The pleasure of seeing their face as they grab the mic and look out on the crowd!! UNREAL. Brandon, who sang "Letter to the East Coast" in Seattle had never been on stage before. He came up and *owned* it. The night before, Craig tossed his lyrics in the air during the middle of the second verse and the crowd went nuts.

Stay tuned for more updates from the road by John and Annie. Download the entire Pixel Revolt album remixed "in Analog" by Scott Solter. Download the premiere track from St. Vincent's Beggars Banquet debut Marry Me at Gorilla vs. Bear. All tour dates here.