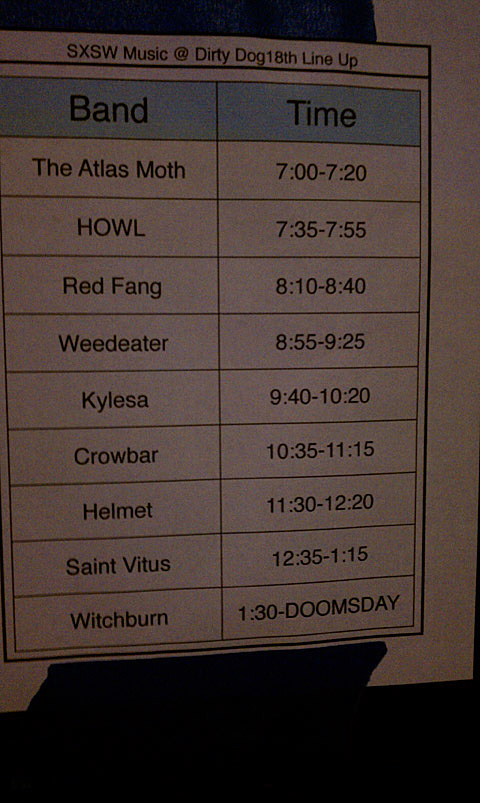 "Grim" Kim Kelly just got home from being on the "Metalliance" tour. She served as crew for the mighty Saint Vitus and rode in the van (read: school bus) with The Atlas Moth. That tour, which also featured bands like Helmet, Kylesa, Crowbar, Red Fang and Howl, hit Irving Plaza in NYC on 3/26, and ended 4/5 in Hollywood. Kim kept a diary and took some pictures on the road. Here is the first half:

I've been looking forward to this show for months, ever since I got word that I'd be hitting the road with Crowbar and Saint Vitus as part of the much-touted Metalliance Tour. Seven bands, about fifty people, just shy of twenty dates, and an incredible amount of gear, merch, and big fucking amps - welcome to the jungle, baby. 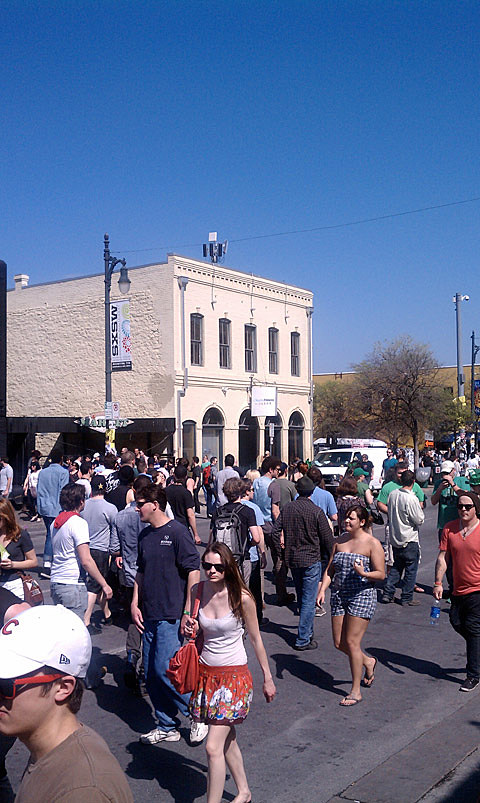 The tour kicked off in Dallas, TX on March 17th, but I hopped on the day after 'cause I'd just toured down to SXSW with Brooklyn doombeasts Batillus. I was already anticipating a clusterfuck of an evening as I walked up to the venue, Dirty Dog, and saw how small it was. As bands and crew members trickled in and brodudes in backwards caps trickled out, the skeleton of a music event began to take shape. Finding space for our collective merch was a nightmare, but finally, about three seconds before doors opened, Kate (Crowbar), Sara (Kylesa) Stef (Howl) and I (Saint Vitus) had ourselves situated in a wobbly line across the front of the club. The rest of the bands - The Atlas Moth, Howl, Red Fang, Helmet, and special guests Weedeater - got tucked away in the back, where I hope lots of people found them and purchased their wares. 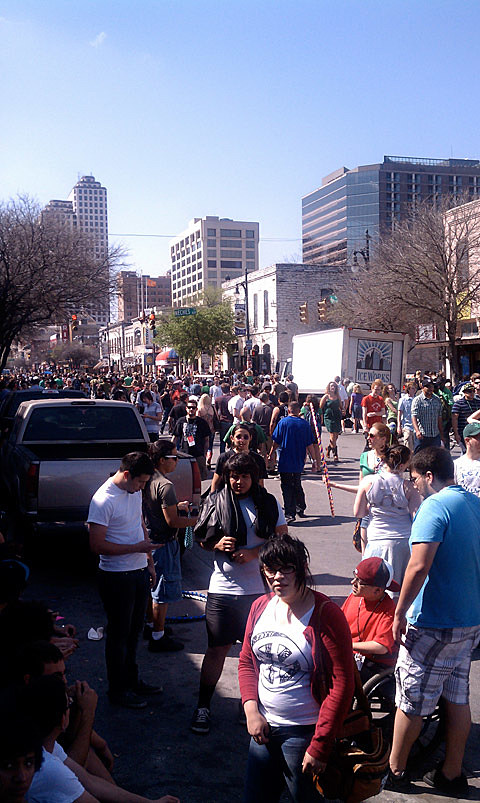 And then, the floodgates opened. This show was apparently THE show to be at that day, and hopeful patrons were lined up around the block hours before we even cracked open our first road case. The place was rammed within minutes, and got so packed that the security guards quickly adopted a "one in, one out" policy. The guest list was fucked, lots of metalheads and industry muckety-mucks were bummed, and a helluva a lot of both were smuggled in by various industrious band members during the course of the evening. The more the merrier, right? Apparently not, according to the fire marshal that rolled up halfway through and threatened to shut the whole show down. The venue staff was all over the place and increasingly hostile, telling us at the front to pack up our mammoth merch display and condense it into one cramped little corner in between quarreling amongst theselves. As The Atlas Moth, Howl, and Red Fang thundered through their respective sets and Kylesa started up their projector, a bevy of tour managers, security guards, frustrated crew, and cops hashed out a plan to keep the hundreds of amplifier worshippers inside from being thrown out on to Austin's increasingly filth-ridden streets (dudes, really, they do have trash cans). As chaos reigned on, and the decibels climbed ever higher, the now totally exasperated merch crew admitted defeat - everyone except me packed up their stuff and called it quits, but Vitus' tour manager was adamant about my staying put. We sold a respectable amount and the guys put on an absolutely killer show, as always, but little did I know that the confusion and hassles of that first night would quickly become a permanent fixture in our daily lives. Let the madness begin...onwards to NOLA! 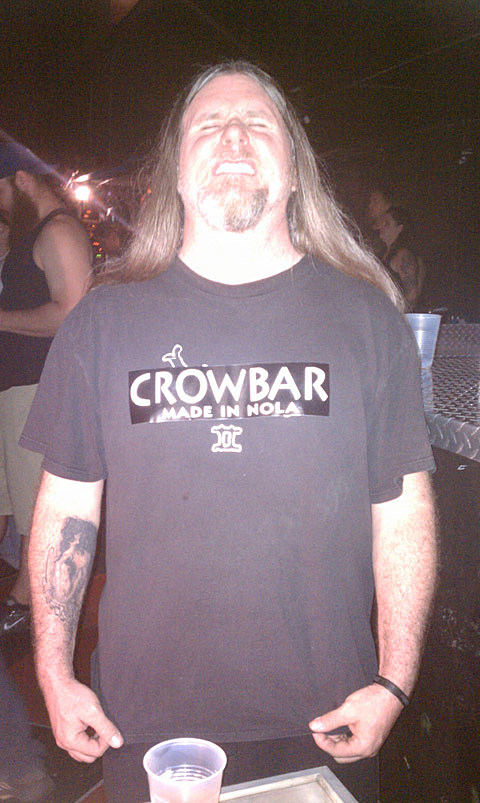 New Orleans is Crowbar country, and the show was sold out long before our motley crew made our way down Toulouse and into the fray of tourists, gawkers, and general oafs littering the perilously cobblestoned path from trailer to door. Load in is an epic undertaking at the best of times, and given the sheer amount of gear we're packing - remember, seven bands - every day is a new struggle to get everything and everyone in the door and accounted for. The spare hour or two you end up with between load in and doors opening is precious, and this time, Kate and I made the best of ours by hitting up Coop's for the best fried chicken in the city. Seriously recommended (by natives and transients like me alike).

There was already a line around the block by the time we started hauling our stuff inside. One Eyed Jack's is a cool venue, with a friendly staff and ample merch space (things that really make a difference on this tour). It's also a stone's throw from Bourbon Street, so you can imagine the various hijinks that ensued later on that evening. If you're the drinking (or otherwise indulgent) type, it is almost impossible to stay sober in NOLA. We in the crew behaved while there was work to be done, but after all the money was counted and boxes were stowed, well, I couldn't tell you what happened next. All hail Dixie whiskey. 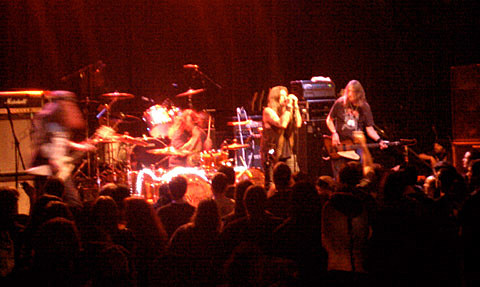 The worst thing about this tour is the drives. Whether you're in a bus, a van, or a converted short bus (I'm looking at you, The Atlas Moth), traveling eight to thirteen hours to each show is a major bummer. At this point, everyone is way hungover and utterly exhausted, and morale has dive-bombed. We get to the venue - an intimidatingly large theater in downtown St. Pete's - and are informed that we have about an hour before doors open thanks to the addition of a couple local bands, which is exactly what our dirty, tired, and grumpy selves do not want to hear. The club staff seemed mystified about how to handle our mountains of gear and walls of merch boxes (which was already a familiar experience) and I had to kick some self-impressed metalcore band out of Crowbar/Vitus' merch space. I never like asking people to move and always try to be as nice as possible about it, but when it comes down to it - this is Saint Vitus, dudes. Y'all need to scoot. The show was kind of a bust, with less than awesome attendance and so-so sales, but it sure was nice to get a taste of Florida weather.

I've been riding with The Atlas Moth since the beginning of tour because I love them to bits and things on the Crowbar/Vitus bus are cramped. After the show, we piled into their converted short bus (yup, you read that right. It rules) and headed down towards Orlando to crash with a friend of theirs who was slated to work on their new record. That friend's name? James Murphy. 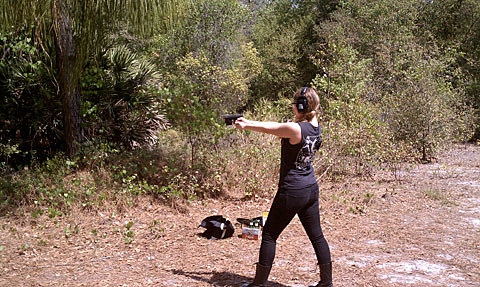 Any death metal fan worth his/her salt knows who James Murphy is (no, not that James Murphy). Dude played in Death, Testament, Disincarnate, Obituary, and Cancer, has contributed guest work to dozens of albums, and is now one of the most respected producers in extreme metal. One of his upcoming projects is The Atlas Moth's sophomore album, which is nearing completion and will tear your faces off (just sayin'). He is also one of the most thoughtful, generous human beings I've ever encountered throughout all my travels, and his kind-hearted provisions of food, bed, showers, and conversation did a lot to boost our flagging spirits. Anyone out there who has taken a touring band into their homes and shown them that amount of kindness is a very special person indeed, and will never know just how much they are appreciated by the scruffy transients they house. In addition to being an all-around nice dude, James is something of a gun aficionado, and took us shooting in the woods behind his house. I grew up around guns but had never fired one before, and the 'Moths are mostly city boys, so we were pretty stoked to have that experience, and of course, blow some empty bottles the fuck up!

We reluctantly left James' sanctuary and headed into Orlando, watching the Disneyfied landmarks flash by and wondering about what kind of seedy underbelly could be lurking beneath the Happiest Place on Earth. Orlando is a weird town. The show was decent, and I was overjoyed to finally see my boy Myk from Hot Graves (amazing blackened d-beat from Gainesville, a must-listen!) and of course, the weather was lovely. For someone who splits her time between the Northeast and Ireland, the slightest hint of sunshine is a goddamn event. 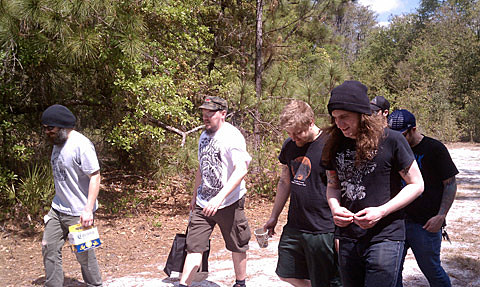 This tour has been hitting a lot of unusual cities, and the routing is seriously fucked up. Only someone who has either never toured or doesn't realize that while the headliners may have a comfy bus and driver, there are four other groups of people on this tour who have to figure out how to catch a few hours to sleep, shit or shower between loading out from one night's gig, driving ten hours, and getting to the venue by two pm the next day to load in and play a show, would have booked this thing. These drives are brutal, and it's really beginning to show in peoples' energy levels and attitudes. For some inexplicable reason, we skipped Atlanta and went straight up to North Carolina.
The Raleigh/Chapel Hill/Greensboro area is a great spot for live music, and people at the show were really, really excited that Saint Vitus were playing their burgh. The meet'n'greet was packed, and the boys were inundated by requests for photos, autographs, and compliments. One dad brought his two little boys to the show to rock out and meet Kirk, who happily obliged with photos and hugs. Crowd reactions and merch sales have been killer so far, and people have been really rad about tipping the merch crew (thank you, seriously; you literally help keep us alive. Those five bucks will be the difference between our getting to eat once a day or twice). The bands and crew are starting to gel and bro down together, which makes the grueling tour schedule a little easier to bear. Our next show is at Jaxx in Virginia, which means I'll be getting closer to familiar territory and the Southerners are going to start breaking out their leather jackets and frowny faces. Hah! 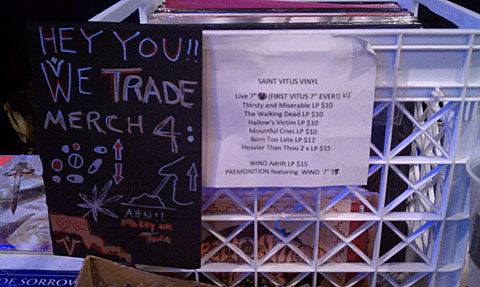 We dragged ourselves out of Michele from Black Skies' adorable little house after grabbing a quick four or so hours of sleep and headed north. Jaxx kind of sucks, but at least the Chinese joint around the corner was awesome. The venue had us set up in the bar area and monitored the underagers coming in to buy merch, which seemed like way more of a hassle than simply letting us spread out in the main room, but hey, what do I know. Attendance was okay from what I saw from my isolated perch, and the merch/bar area was rammed, as one would expect. My bud Aaron from Salome came out to hang and kept me company behind the table, which ruled; other than that, nothing much else of note happened. Saint Vitus have been playing a new song, and as a longtime fan, I feel comfortable saying it's as good as anything they've ever written. They're working on a new record and are currently label hunting and planning some more touring actions, so 2011 should be a big one for Vitus. I feel incredibly honored to be working with a band like them.

Another day, another long haul, another sleepless night. Next stop, Worcester.