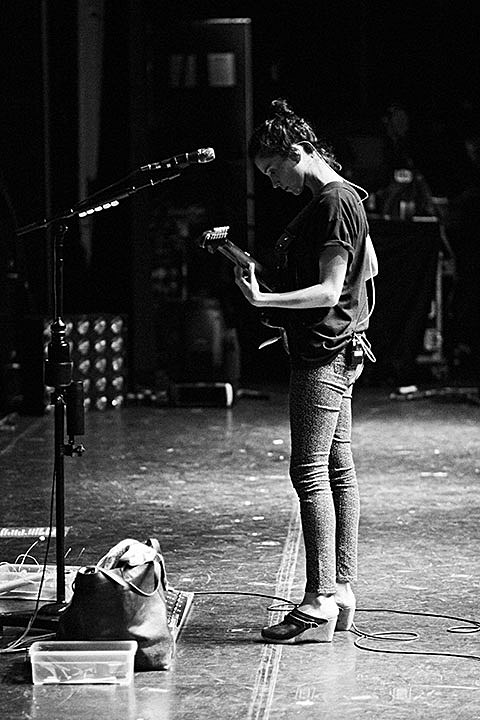 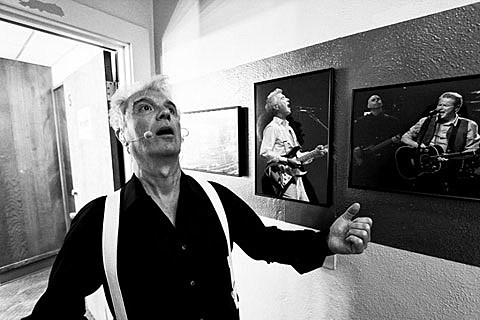 Kelly Pratt of Bright Moments and many other musical projects has been on tour with David Byrne and St. Vincent, and chronicling it on BrooklynVegan. If you're just joining us, also check out part 1, part 2 , Part 3, Part 4, and Part 5. Part 6 begins here...

San Diego through Vancouver and beyond

After the Dallas show we all pile on the bus for the long trek to San Diego. Fortunately we don't have to tackle it all in one drive so we stop in El Paso for the day off. Jon N and I end up taking a long bike ride, including a shady trek through an arroyo, to go see Looper. The film turns out to be quite entertaining, despite its numerous violations of the grandfather paradox.

The following morning we wake up in San Diego at Humphrey's Half Moon, a fancy resort on Shelter Island. We have the day off again, so most of us bike to Mission Beach to enjoy the food and drink on the boardwalk. We meet up at a bar with two friends of John A and while everyone else heads to the beach, I stay behind to hear about the profession of one of them: horseshoe crab blood salesperson. She explains that the blood is vital to the pharmaceutical industry as a testing agent to ensure their products are free of bacterial infection. The crabs "donate" their blood, then are placed back in the ocean where their blood volume returns to normal within a week. With the price tag of $15,000 per quart the blood is quite valuable, and some of us make a silent pledge to change careers at the end of the tour.

The following night's show takes place in the outdoor courtyard of the hotel. Susanne, the lighting designer, sets up her rig directly on the balcony of my room. We are situated right next to the marina and during the show several dozen people pilot their boats into a little recess where they can hear (but not really see) what is coming from the stage. During our set David addresses them as "the boat refugees" and thanks them for coming.

The next few shows are a bit of a blur, primarily because we are playing every night. While there may not be as many opportunities for extra-curricular activities it feels nice to get into a bit of a groove. If anyone knows what tour momentum is about, it would have to be The Melvins. On the road at the same time as us, they are currently attempting to break a world record of "51 shows in 51 states in 51 days". They have a fascinating (and funny) account of it here. Reading of Trevor Dunn's encounter with a rowdy fan during an improvised bass solo reminds me of a recurring joke from our tour. Early on Brian Wolfe told us of his theory of free jazz. According to him you can boil almost the entirety of the history of the music down into two factions: "scratch 'n sniff" and "pet store on fire". Both types can be present within a single composition, or even simultaneously, but one must be present at all times. It is a joke of course, but close enough to the truth.

At 5700, the Greek Theatre is the largest venue of our tour and one we have been looking forward to since the beginning of rehearsals. It is a stunning amphitheater and has housed many legendary concerts including Neil Diamond's "Hot August Nights". Everyone is a bit nervous, but nerves quickly dissipate as concentration is vital to this show. Afterwards we have our largest group of guests yet, including Jason D's parents. One lovely thing about this coast to coast tour is that many members' parents are able to see the show, including mine. We also get to meet our second O'Hara of the tour, Catherine (Mary Margaret came in Toronto).

Somehow I've managed to visit a different dim sum establishment nearly every time I've come to San Francisco. So upon arrival I decide to bike on my own to Hong Kong Lounge, one that comes highly recommended. The food is delicious, but I'm reminded of why no one goes to a dim sum restaurant by themselves. Cycling the hills of San Francisco with a belly full of dumplings isn't exactly easy, and I barely make it back for soundcheck. The first few weeks of the tour we picked up a ritual we have been performing every night, and it follows us here. The last song we play every night is The Talking Heads' "Road to Nowhere". The choreography is a loose follow the leader with the horns ending in a straight horizontal line behind David and Annie. As we leave the stage for the final time the line breaks in two and we depart on opposite sides, playing an improvised reprise of sorts. Once we are firmly backstage we continue playing, but the song morphs into a television theme song, typically one that takes place in the city we are currently in. Some previous numbers have included Dallas, Mr. Belvedere, and Laverne and Shirley. Tonight's version, of course, is Full House.

After a week in California we take off for the Pacific Northwest, and the home stretch of this leg of the tour. On most of the days off DB has been giving talks to support his new book "How Music Works", and we all attend one of these the evening after the Portland show. For this particular talk David is joined by Carrie Brownstein of Sleater-Kinney and Portlandia. 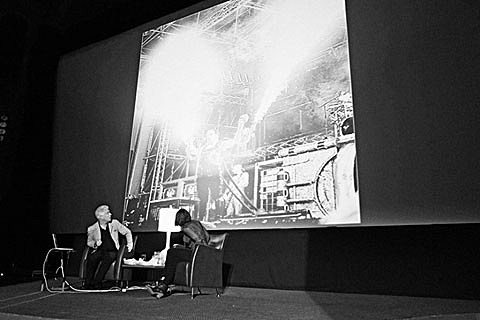 The format consists of David flashing an image onto a movie screen, followed by the two of them talking about what that image means to them. As a result the majority of the talk is concentrated around the importance of the visual side of a musical performance, be it fashion, lights, or movement. It is quite fascinating and something most musicians should spend more time thinking about. After Vancouver some of us take the bus back to Portland, while the rest of us head back to NY for a few days rest. Next up Colbert, and Australia in the New Year!

'Til next time,
Kelly

Watch Kelly, the rest of the band and David Byrne & St. Vincent on Colbert tonight (11/1).

They were also supposed to play Letterman the other night, but that was cancelled due to Sandy. Speaking of, read a Sandy-related letter David Byrne sent out to his mailing list, with more pictures from their tour, below...

We're weathering the days in the dark city. At present I'm in Brooklyn, where toilets flush and lights burn bright. We can see the row of the dark monoliths that constitute downtown Manhattan from here. I'll return to my campsite on the 11th floor tomorrow, after St. Vincent and I do a song or two on Colbert. No elevator service south of 31st St. or so, which means 11 flights with a flashlight up a dark stairway--but it's home.

Normally, I would post a new streaming radio playlist at midnight tonight. I was at the end stages of getting it ready when the storm hit but my office closed due to the power outage, meaning no access to the computers and software that would allow that all to happen. Doing it remotely is possible, but difficult, and hardly a priority these days. Anyway, expect that to happen as soon as the power is restored. 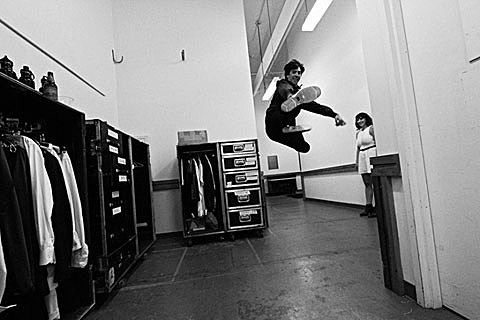 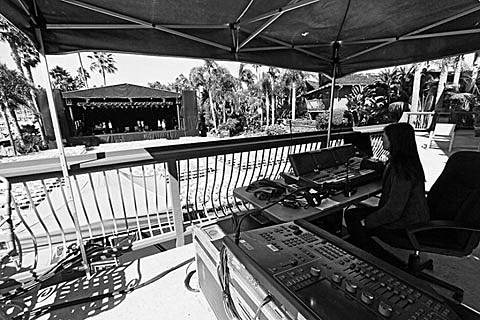 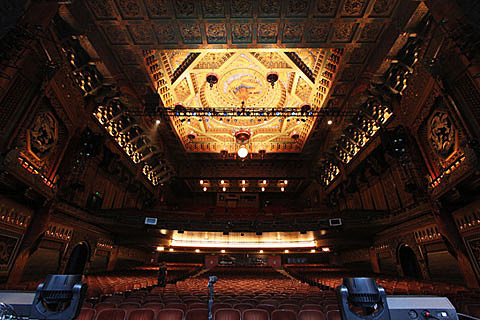 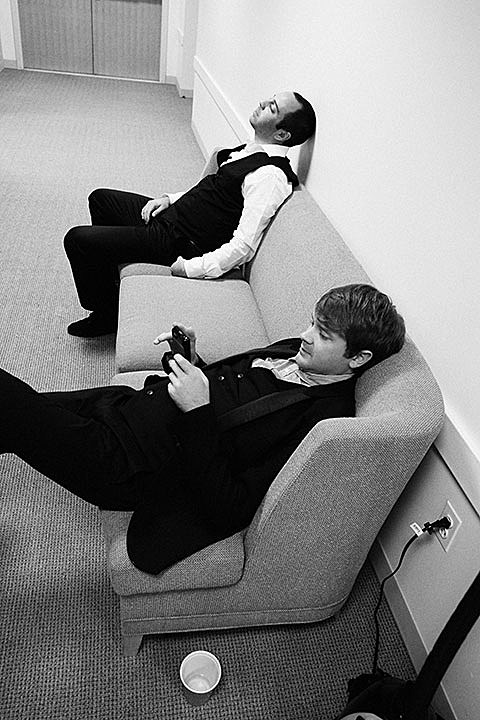 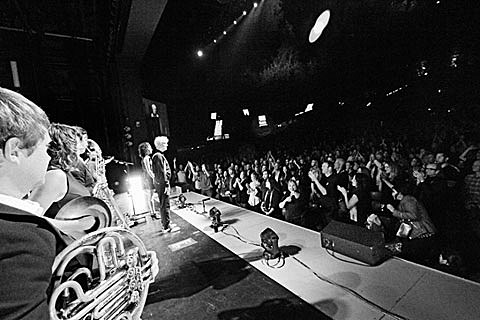