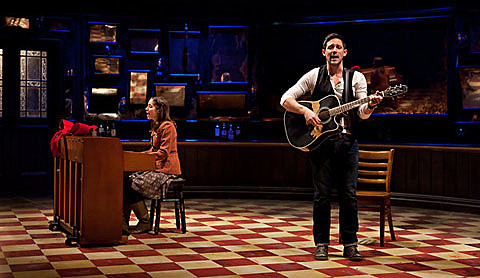 Given the natural, understated quality of Glen Hansard and Markéta Irglová's heartfelt performances in the movie Once, it's hard to imagine anyone else successfully embodying their roles. The movie not only starred them, but was written by them; it was inspired by their story. And it takes some time to get comfortable with the new faces. But the transition from the screen to the stage isn't too much of a stretch. Much of the music has already been written, after all.

For the most part, Once, which recently opened on Broadway after a three-month run at a smaller theatre in the East Village, closely resembles the film. Girl meets boy busking on the streets in Dublin and soon (a bit too soon?) the two are sharing intimate details of their lives and making music together. Of course, it's not so simple.

With his polished good looks, Steve Kazee as the male lead comes across as a bit too suave and content for a man who supposedly embodies a dispirited loner, and Cristin Milioti as his counterpart lacks some of Irglová's vulnerability - not to mention, her character's Czech background can sometimes feel forced ("I'm always serious. I'm Czech!" she kept repeating for laughs, in an exaggerated accent). But any reservations about the new cast evaporate as soon as they pick up an instrument and begin to sing. Imitating Hansard's distinctive growl of a voice is no easy task, but Kazee holds his own. And the supporting cast (especially David Patrick Kelly as the man's father) is charming.

Though, it is billed as "fun" and "life affirming," the musical, like the film, is just as heartbreaking as it is romantic. As circumstance would have it, he has an unfinished love in New York, and she has a small child and - though we never see or hear him - a husband. As much as they might want to, running away together is never really an option. But in this case, the unnamed characters' quiet resignation to their separate fates only raises the story's emotional impact.

The stage setting - the dimly lit interior of a pub - is minimal. With a few small tweaks, the audience is made to imagine a music shop, a flat, and in one scene, the Irish coast. But the bare bones staging adds to the warmth of the production. The typical marks of a big-ticket Broadway production - flashy scenery and overly produced music - are wisely omitted by director John Tiffany in favor of a more modest musical with a big heart.

Once is on Broadway now. Tickets are at Telecharge, and there's a cast recording too.

In related news, Glen Hansard has a solo album on the way (that both Marketa Irglova and Cristin Milioti contributed to).

You can watch a montage video from the musical, below...